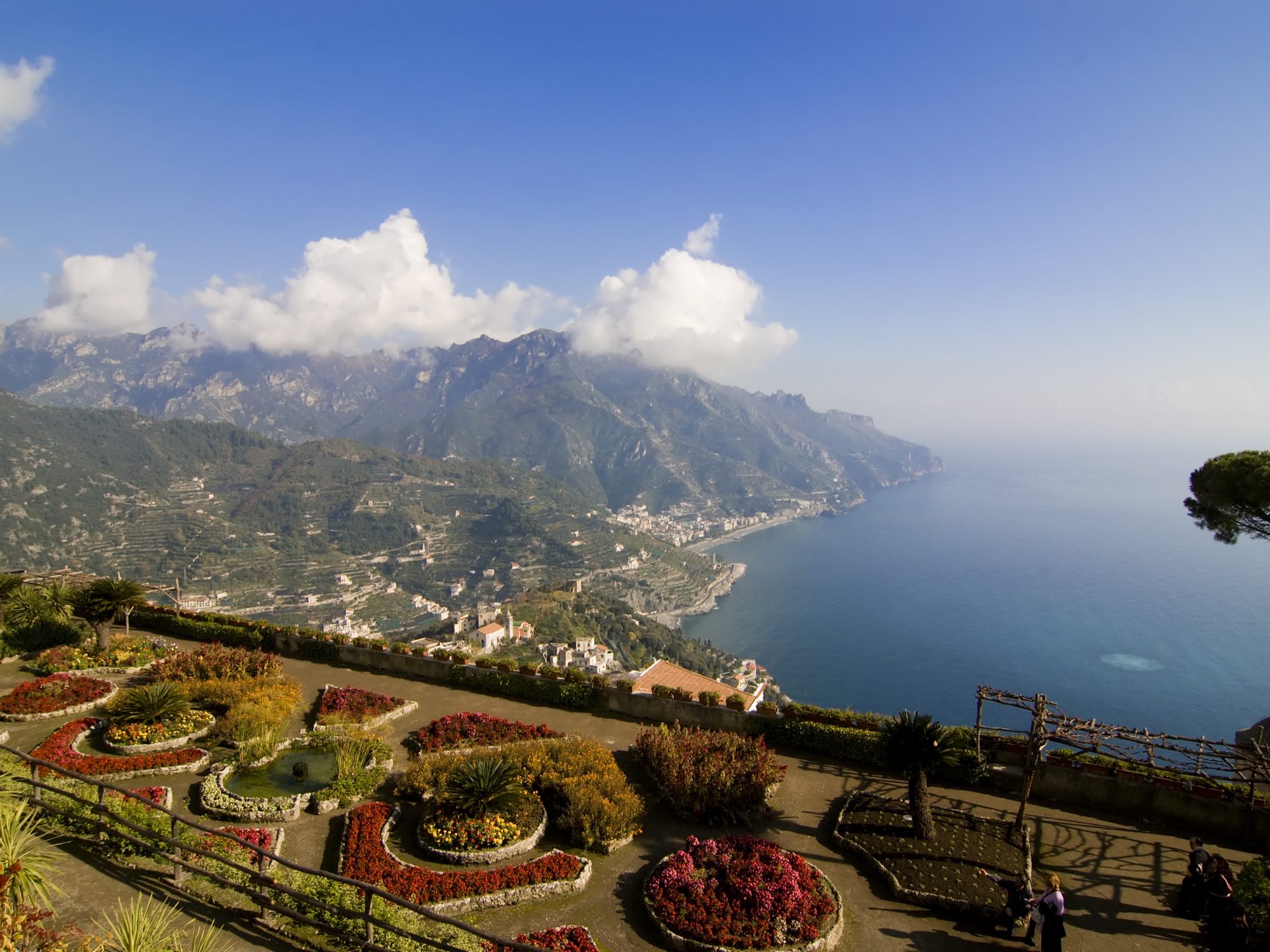 The earliest inhabitants of the region of Campania consisted of three ancient Italian tribes, the Osci, the Aurunci and the Ausones. Greeks also established various settlements in early times, specifically surrounding modern-day Naples. The strategic location of the region made for an ideal trading mecca with other cities along the Mediterranean Sea, which highly influenced the rise and success of cities such as Pompeii and Herculaneum. Naples, the capital city of Campania, is the 3rd largest city in the country and is one of the oldest continuously lived in cities on earth. The founding of The University of Naples solidified Naples as the scholastic center of the world, during the Kingdom of Two Sicilies. The university is the oldest state institution in the world.

The rich soils of the mountainous countryside blend effortlessly with the pristine waters of the Amalfi and Cilento coasts, creating one of the most beautiful regions in Italy. Mt.Vesuvius proudly overlooks the Bay of Naples, a constant reminder of the eruption of 79AD that devastated the prospering cities of Pompeii and Herculaneum.

From the Tarantella to Feast of San Gennaro, Campania is a region rooted in tradition. It is a culture of welcoming and passionate people, anxious to share with the world what makes living here unlike that of anywhere else in Italy. The mild, year-round climate and surplus of UNESCO World Heritage Sites make Campania an obvious choice for your next trip to Italy.

Take a step back to 79AD while you uncover the ruins and ancient life of a city frozen in time, Pompeii. The irrigation system, government and complexity of everyday life in Pompeii was at a caliber of technology far ahead of its time. If you are the adventurous type, make your way to the peak of Mt. Vesuvius, which is still active today.

Charming villages, secret grottoes and hidden beaches are only three of the reasons that locals and foreigners alike have become obsessed with the Amalfi Coast. Whether you are zipping along the “Nastro Azzurro”, appropriately named after the ribbon of continuous blue sea below, or taking it all in from the privacy of a chartered yacht, this is undoubtedly why people fall in love with Italy. The lesser known Cilento Coast is just south of the Amalfi Coast, and is equally as beautiful with a more rustic feel. Campania is also home to three islands, Capri, Ischia and Procida. Capri, the most romantic getaway in the region, is home to the Blue Grotto and cannot be missed. The soothing, medicinal waters from the natural hot springs in Ischia make for a perfect spa getaway.

Last but not least, you will never feel more alive than you will in Naples, Italy. The chaotic, crowded streets of Spaccanapoli are bustling and just about anything you can imagine is out for sale. While you ponder which pizzeria is better than the next, a scooter with 3 people practically runs you over on the sidewalk. Despite being one of Italy’s main metropolis, you are more likely to hear Napoletano dialect than Italian, but that’s part of the excitement. Baroque architectural masterpieces meet the perfect palm tree lined promenade to remind us, there is still tranquility to be had in this amazing city.

What you Should Eat There

The food in Campania is just as colorful as the vibrant culture of its people. Cooked for just 90 seconds under a traditional wood-fired brick oven, feisty red sauce simmers and fresh bufala mozzarella oozes coming together to create the ultimate Neapolitan treat, pizza. The cuisine in Campania is all about utilizing a balance of ingredients from the countryside and the sea. Hearty dishes like pasta e fagioli are more typical inland, where zuppa di cozze is common along the sea. Mozzerella finds its origins in Campania as well and is used in a variety of regional dishes such as the Caprese salad, and my personal favorite, grilled between lemon leaves. The breathtaking panoramas of the Amalfi Coast are only further enhanced by the unparalleled cuisine. Once a coast of fishing villages, from Positano to Salerno, these towns have retained the authenticity of their maritime past. Fragrant lemon groves spill over sun-drenched pergolas perched high above the sea. Paired with the freshest seafood imaginable, you are in for a sensory overload that will make it hard to eat anything else.

Sometimes overlooked in comparison to the Barolos, Chiantis and Amarones of the North, the wines that reign from Campania have a long history with flavors that will surprise you! The Aglianico and Greco di Tufo grapes were first introduced in Italy by the Greeks. The Aglianico grape was the major component in Falernian, the world’s oldest first-growth wine. The volcanic soil of Mt. Vesuvius is home to the prosperous vineyards of Lacryma Christi. Lacryma Christi is one of the oldest wines in the world, and recent archeological finds have determined it was the same wine consumed by the emperors and diplomats of Ancient Rome.

Bring Campania to Your Kitchen Table

My Eataly products were Il Pastaio di Gragnano Vesuvio pasta and San Marzano canned tomatoes, and I couldn’t be happier!

The town of Gragnano was created with pasta on the mind. The salty sea breezes of the Amalfi Coast met the rich air of Mt. Vesuvius, infusing the pasta with a flavor unattainable anywhere else in the country. The shape of my Il Pastaio di Gragnano pasta was “Vesuvio”, a cross between a shell and a short fusilli.

San Marzano tomatoes are regarded by culinary enthusiasts and chefs alike as the best in the world. They prosper in warm climates, such as Campania because they come from an indeterminate vine. These unique plum tomatoes are truly a gastronomic staple in Campania. So much so that the Associazione Verace Pizza Napoletana has actually mandated that a pizza can only be considered a true Neapolitan pizza when San Marzano tomatoes are used.

Growing up in an Italian-American house, our favorite meal of the week always involved a delicious homemade tomato sauce. In my house, long fusilli was our pasta of choice. What a coincidence that Il Pastaio di Gragnano still makes handmade fusilli today, the most characteristic pasta of Gragnano. The unique shape of the Vesuvio pasta is perfect for capturing all of the ingredients in every bite. With this in mind, I decided to sauté hot Italian sausage, onions and garlic in EVOO as a base for the sauce. I added the San Marzano tomatoes and a tad of heavy cream to thicken the sauce. Freshly grated parmigiano reggiano made for the icing on the cake.

1. What flavor differences can you immediately sense between normal plum tomatoes and San Marzano tomatoes?
2. What is your favorite Italian dish that could be made with both or either of these products?
3. What destination in Campania could you picture yourself eating a bowl of Il Pastaio di Gragnano pasta with a San Marzano sauce?