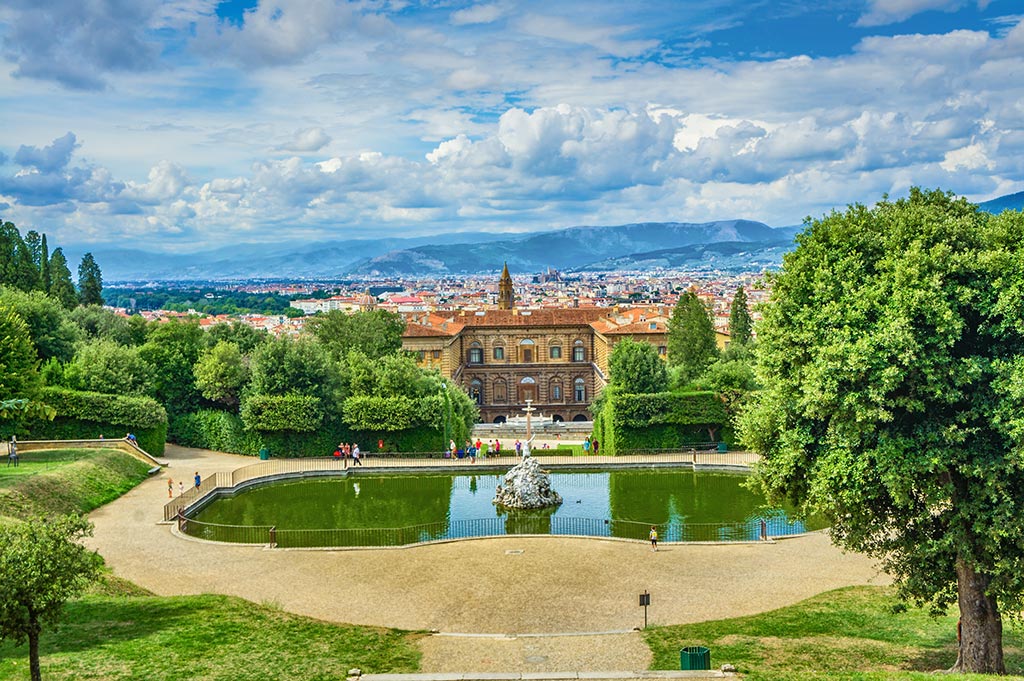 Looming large on the Florentine skyline the Pitti Palace is the grandest and most impressive private palazzo in the city. Built 560 years ago, it has been home to millionaire bankers, the famous Medici family, Napoleon and the King of Italy. And today it houses eight museums, over 250,000 works of art including masterpieces by Titian and Raphael and nearly two miles of secret passages. Let’s take a step back in time to explore what life was like for the aristocrats of Renaissance Florence.

When Luca Pitti, an ambitious Florentine banker, first decided to build a town house in Florence he wanted to make a statement. As a contemporary, friend and knight of Cosimo de Medici, local legend suggests that there was also a spot of rivalry between the two bankers. So Pitti is alleged to have told his architect to make the windows bigger than the entrance to Palazzo Medici. He chose the quieter, greener Oltrano district on the south bank of the River Arno where there was more space to build an enormous palace set back from the road, without being hemmed in by other buildings, thus making it more noticeable and monumentally imposing. And by the time the Pitti Palace was completed in 1470, it made quite an impression as the largest in the city.

Sadly, Luca Pitti’s glory didn’t long. He died in 1472 and within less than a hundred years, the money had run out, forcing his family to sell up; ironically, to the Medici, the very rivals with whom Pitti had been competing. And as with any home purchase, the Medici quickly set about extending, enlarging and re-styling the already enormous house, doubling it in size to create the majestic palace that we see today.

Inside the glorious Palazzo Pitti

The Medici didn’t only expand the palace, they also set about redecorating, too, just as modern homeowners do. As did the family of the House of Lorraine who moved in after the Medici in 1734. And then the King of Italy, Victor Emanuel II of Savoy, took over in 1866, refurnishing and re-carpeting several rooms in the Royal Apartments. The result is a wonderful mix of three different styles, stretching from the mid-1500’s to the late-1800’s.

Echoes of the Medici can be seen in the sumptuous stucco decoration, lavish gilded inlay work and even an ebony and precious stone ornamental cabinet that has survived nearly 400 years. TheHouse of Lorraine added neoclassical ceilings, magnificently painted salons, hand-embroidered silk panels and Rococo stucco throughout. And the King’s tastes can be spotted in 19th century additions including the regal ruby red damask throne room. The overall effect blends extravagance, luxury and excess throughout the public rooms, giving you a beguiling glimpse of the Pitti Palace’s heyday. But there’s even more to see than just ornately-styled rooms.

Choosing what to see

One great place to start is with the Palatine Gallery. Started by the Medici, it houses one of Italy’s most important painting collections, incorporating works by Renaissance masters such as Raphael, Botticelli, Filippo Lippi and later artists including Rubens and Van Dyck. It reads like a Who’s Who of the art world and is a must for art lovers.

Alternately, if you prefer craftsmanship, why not make a turn around the Silver Museum, nicknamed the ‘Medici Treasury’ for its priceless jewels, jewelry, Chinese porcelain and ornately-encrusted religious artifacts? Or wander through the Costume Gallery in the little Palazzina della Meridiana at the rear of the Pitti Palace, to admire the collection of historical clothes and accessories that extends from the 1700’s to the present day. The exhibits rotate and change regularly, showing off the fashions and styles of various periods and how they’ve evolved over the years. Which of the past fashion trends would have been your favorite, I wonder? Leave us a comment and let us know!

If you need some fresh air after all that indoor exploration, there are also the Boboli Gardens that climb up the hill behind the Pitti Palace and offer glorious views over the city. The gardens are often described as the ‘lungs of Florence’ and are an open-air museum in their own right, with beautiful classical sculptures and historic buildings, including the limonaia lemon house and the Casino del Cavaliere that houses the Porcelain Museum. And entrance to the Silver Museum, Costume Gallery and Porcelain Museum are all included on the Boboli Garden ticket, making it an excellent buy.

We’ve not even touched on the Carriage Museum, the Gallery of Modern Art or the Royal Apartments — I told you, there is a lot to see!

Make a day of it at Florence’s Pitti Palace

Ultimately, Florence is a treasure trove of world famous art, breathtaking architecture and fascinating history, having been a key player in Italy’s development down through the centuries. And a visit to the Pitti Palace offers a portal back in time to the days when Florence was at the zenith of its influence on Italian, and even European, culture. Fortunately, our lovely travel experts are on hand to help you make sense of it all and select the right galleries, exhibits and museums from the array on offer, thus maximizing your time spent exploring this fascinating, once private residence.