When Cosimo de’ Medici and his wife Eleonora bought the Palazzo Pitti in 1549, it was to become their new grand ducal palace. And just like every new homeowner, they set about redesigning, redecorating and extending it to suit their requirements. They didn’t just limit themselves to the interior either; they made sure that the gardens to the rear of the grand palace were fit for the ruler of Florence. And so the Boboli Gardens were created, as a pleasure garden and park for the Medici family. Today it’s possible to visit the gardens for yourself — let’s have a look at what wonders you’ll find.

The Medici wasted no time and within months of their purchase had commissioned court artist Niccolò di Raffaello de Pericoli, nicknamed “Il Tribolo,” to draw up plans for the new gardens. The first phase concentrated on the grounds nearest to the palace, taking influences from Roman myth and legend to create a large, decorative amphitheater bordered by meadows that climbed the hillside behind it. Instead of a stage, a lawn filled the space between the amphitheater and the palazzo, while niches filled with statues topped the walls to create a theatrical effect. And at the southern limit, Pericoli laid out a classically Italianate box-hedged rose garden, next to what is now the Museum of Porcelain.

Sadly, he died just a year later, in 1550, before completion of the garden. But others took up the baton as the Medici continued their expansion up the hill behind the Pitti Palace.

As the Medici grew more powerful, their gardens grew in size, maturity and ornamentation. And the Lorraine who took over in the 18th century continued their work, with both families adding statues, fountains, long shady promenades and secluded groves to create ‘rooms’ and vistas within what is now an open-air museum. In fact, the gardens you see today took centuries to develop; the result is a wonderfully serene yet fantastical idyll, tucked away from the hustle and bustle of downtown Florence. 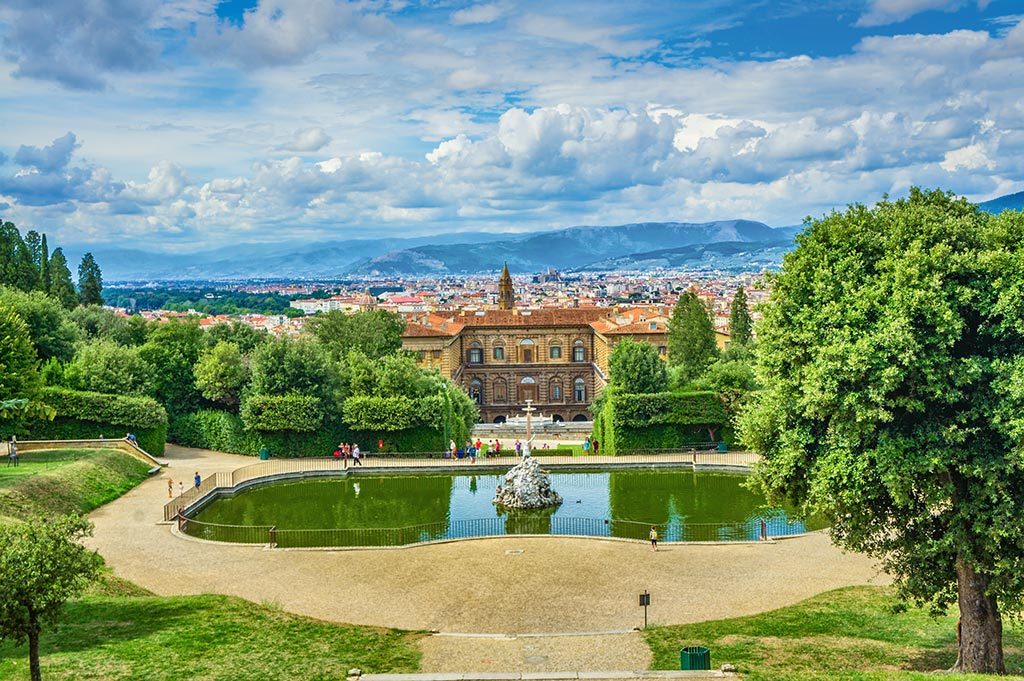 
Today the Boboli Gardens, some of the first formal Italian gardens, are open to the public as part of the Pitti Palace complex and offer a lovely afternoon getaway. And there’s plenty to explore.

From the Roman-style amphitheater at the rear of the Pitti Palace, the gardens continue uphill with a series of gentle staircases set into the landscape. The reward for climbing the steps is a masterful mannerist statue of Neptune, known locally as the “Fountain of the Fork,” by Stoldo Lorenzi in the center of a swimming-pool-sized pond. Sit for a while and let the gently hypnotic pitter-patter of the water soothe your soul, just as the Medici did four hundred years ago.

The pond provides a hub from which you can venture further into the Boboli Gardens in any direction you choose. Head southeast to the dominating Belvedere Fort, built by Ferdinando I de’ Medici. The fort was intended to protect the Medici family, to demonstrate their immense power, to hold their treasures and to provide a bolthole in the case of emergency. And while it was never put to the test, there are some fabulous views out over the city below (belvedere means ‘beautiful view,’ after all!).

Continue to the top of the hill overlooking the palace and you’ll find the beautiful, allegorical figure of “Abundance.” Draped in a Roman-style dress, delicately fashioned in stone, the sculpture was started by the master sculptor Giambologna; you can admire his unrivaled “Rape of the Sabine Women” in the Loggia dei Lanzi in Piazza della Signoria.

Or strike out west, along the long, straight Viottolone promenade that is lined with cypress trees and statues marking the way to the Isolotto. Designed by Giulio and Alfonso Parigi in 1618, the Isolotto is an oval-shaped island ringed by a moat and trees. It has a high visual impact — at the island’s center sits the Oceano Fountain, again by the Franco-Italian artist Giambologna. The cascade is surrounded by several sculptures including three depicting the world’s most important rivers: the Ganges, the Euphrates and the Nile.

This is one area of the Boboli Gardens where the influence of the House of Lorraine can clearly be seen with the addition of a number of 18th century buildings such as the Kaffeehaus, the Limonaia lemon house and the Palazzina della Meridiana that today houses the fabulous costume museum.

Finally, after a relaxing afternoon strolling along boulevards and paths that once felt the footfall of the great Medici family, it’s time to head back to reality. But before you leave, the Boboli Gardens have a couple of final, fantastically-eccentric treats. Nestled along the northeastern edge of the gardens are a couple of grottoes that are portals into a fairytale land. The largest of the two, the Buontalenti Grotto, is a fascinating spot with a series of bizarre hidden sculptures, stalactites and symbols covering the interior of the cave. But perhaps the most curious statue is right by the exit so make sure to say “ciao” or “arrivederci” to the rotund, drunken court jester sitting astride a turtle!

Florence’s Boboli Gardens are waiting for you

When the young Cosimo de’ Medici and his wife Eleonora first commissioned Il Tribolo to design their gardens, they wanted a park fit for the Grand Duke of Florence. From the top of the hillside gardens, Cosimo could look down over Florence, the city he’d shaped and the engine room of the Renaissance that still impacts our world centuries later. And you can stand in exactly the same spot, admiring the bustling city from the serenity of the Boboli Gardens, with tickets organized by our friendly travel experts. You could even add a couple of museums in the enormous Pitti Palace complex that overlook the gardens through grand windows. Either way, you won’t find a more beautiful, tranquil and verdant spot in Florence for a stroll along paths lined with cypress tress, statues and wonderfully theatrical figures. The Boboli Gardens are waiting just for you. Enjoy!

What to see at Florence’s monumental Pitti Palace

Looming large on the Florentine skyline the Pitti Palace is the grandest and most impressive private palazzo in the city....