Sitting on a verdant hill, almost 1,150 feet above sea level, Ravello, Italy, may be Positano’s and Amalfi’s less famous cousin, but this doesn’t mean it is any less picturesque. Ravello is in fact the ideal place to stay for those visiting the Amalfi Coast who are looking for a quieter experience.

Founded in the 5th century as a shelter against Barbarian invasions as the Roman empire fell, Ravello became an important port of the Maritime Republic of Amalfi in the 9th century and remained so until the 12th century, when it began to decline following an attack from Pisa. From those wealthy times, it has maintained a series of palazzi belonging to the families of noble merchants.

Read on for the essential guide to visiting Ravello, Italy.

Ravello, Italy: What to See & Do

Among Ravello’s major attractions are the magnificent gardens of Villa Rufolo and Villa Cimbrone.

Villa Rufolo was built in 1270 by one of the wealthiest men in Ravello, Nicola Rufolo, who belonged to a powerful merchant family. The location of the villa, with its colorful gardens whose flowers are in bloom most of the year, and the magnificent views of the Amalfi Coast and the Gulf of Salerno, is said to have inspired the setting of the garden of Klingsor in the second act of Richard Wagner’s “Parsifal.” To commemorate this connection, every year a Wagnerian concert is held in the lower garden of Villa Rufolo. 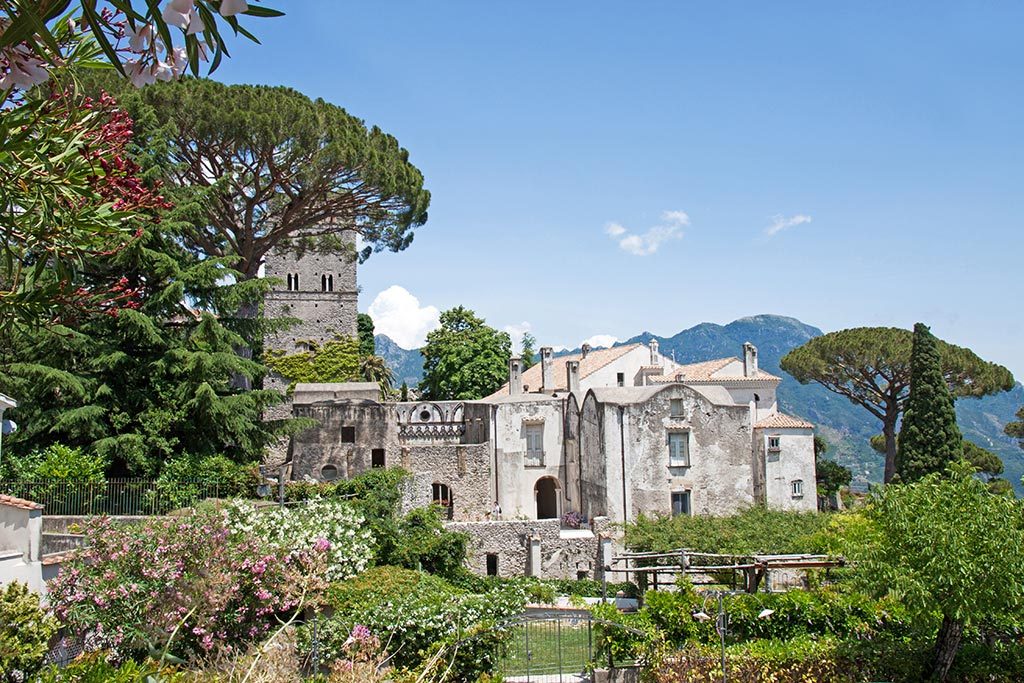 Just beyond the Villa Rufolo Park is the Annunziata Building, which hosts an annual series of concerts by the Ravello Concert Society. When you visit Ravello, Italy, this is one experience not to miss. The building, originally part of the Rufolo family estate, boasts two acoustically-rich recital halls and is the perfect venue for the society’s performances, which run from March to December.

The 11th century Villa Cimbrone stands on a rocky outcrop and is famous for its belvedere known as Terrazza dell’Infinito (Terrace of Infinity). The villa has been turned into a luxury accommodation, Hotel Villa Cimbrone, one of the most prestigious on the Amalfi Coast, with 19 guestrooms and suites, furnished with exquisite antiques and featuring colorful Vietri ceramic floors and stone and majolica fireplaces. The 15-acre botanical gardens, dating to the Middle Ages, were redesigned at the start of the 20th century and became one of the most important examples of English landscape design and botanic culture in Southern Europe. The gardens are open to the public. 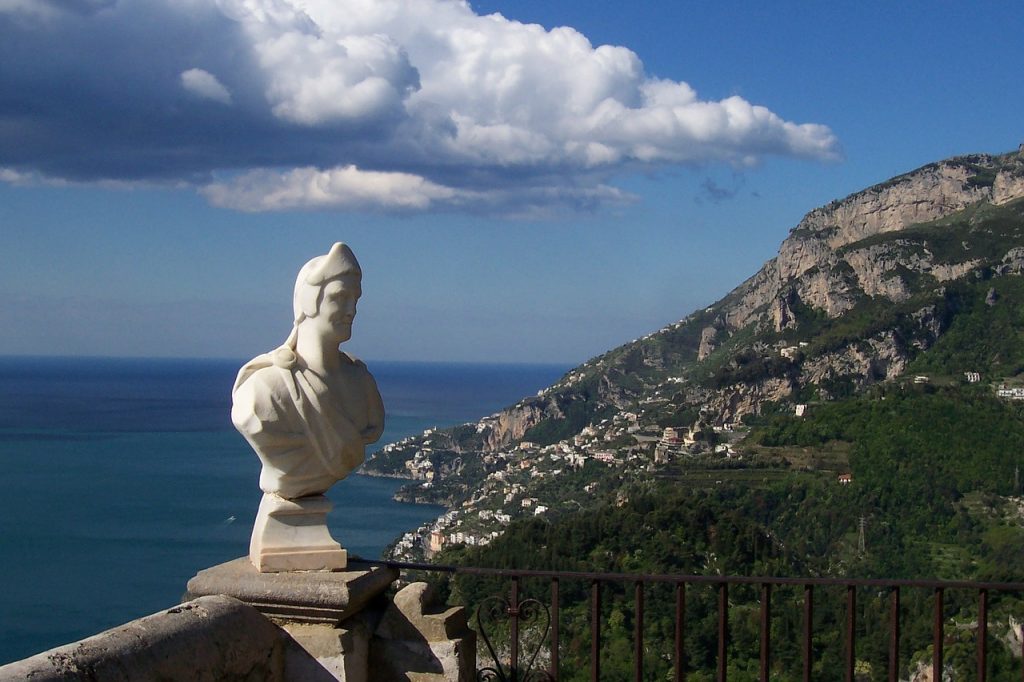 Continuing your exploration of Ravello, Italy, stroll its picturesque alleyways and pay a visit to the Duomo with its notable “Pulpit of the Gospels,”dating to 1272. Another noteworthy church is the Chiesa di San Giovanni del Toro that dates to the year 1000. The pulpit’s mosaics have inspired the interlocking patterns used by graphic artist M.C. Escher, who spent time in Ravello in the 1920s. Ravello has attracted writers and artists since medieval times, when Giovanni Boccaccio visited. In more recent times, it was chosen by Virginia Woolf, Greta Garbo, Gore Vidal, Truman Capote, Tennessee Williams, Graham Greene and Jacqueline Kennedy. 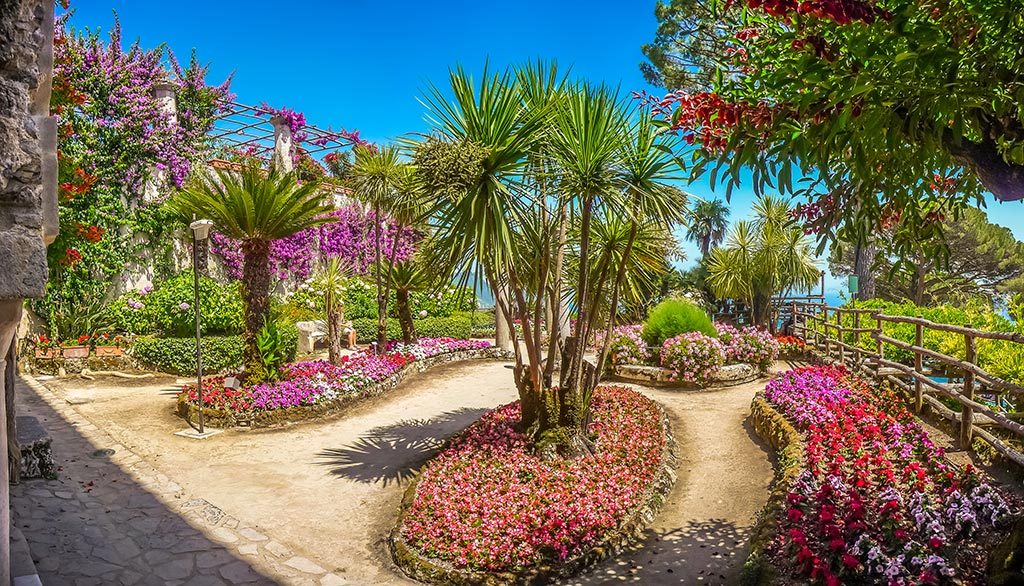 The Amalfi Coast is celebrated not just for its beautiful natural landscapes, but also for its cuisine. In Ravello, a great place to learn about the traditional local cuisine is at Mamma Agata’s Kitchen. As a young woman, Agata cooked for such Hollywood stars as Elizabeth Taylor, Humphrey Bogart and Fred Astaire. During the cooking class, you’ll be entertained by Agata’s anecdotes as she teaches you how to create tasty Mediterranean dishes, from appetizers to dessert. The cooking class is followed by lunch.

Ravello, Italy: Where to Stay

Besides the aforementioned Hotel Villa Cimbrone, another valid option is offered by the luxury Belmond Hotel Caruso, a former 11th-century palace perched on a cliff overlooking the coast. Ancient walls and fresco-covered ceilings have been carefully preserved, strolling in the terraced gardens is a pleasure and the stunning infinity pool makes for a perfect afternoon spent swimming and sunbathing.

The 5-star deluxe Palazzo Avino is housed in what was once the 12th-century private villa of a noble Italian family. It opened as a hotel in 1997, with 32 rooms and 11 suites, a belvedere terrace and a one-star Michelin restaurant.

With such choices of outstanding hotels in Ravello, why sleep elsewhere? However, if you opt not to stay overnight in Ravello, you can still experience its charms and flavors, along with the rest of the Amalfi Coast, on a full day tour that will get you acquainted with the coast’s magnificent panoramas, the history of towns like Amalfi and Positano and the local gastronomy – a taste of the local limoncello is a must!

Hotels in Rome: 4 of the Best Places to Stay in the Eternal City

Looking for Hotels in Rome? Rome, once the ancient capital of the known world, is a fascinating place. From the...