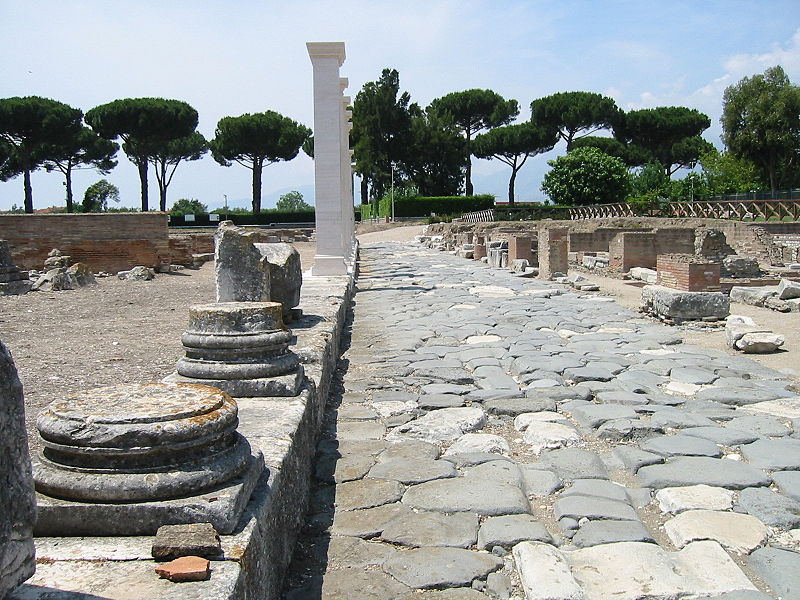 Known as the “Regina Longarum Viarum,” or “Queen of the Long Roads,” the Appian Way, possibly ancient Rome’s most famous road, was built in 312 BC to connect Rome to Brindisi in the south of Italy; it was one of the most important and strategic roads of the Roman Republic. And it is the reason why today we say, “All roads lead to Rome.”

The Appian Way is named after Appius Claudius Caecus, the Roman censor (an officer in ancient Rome who maintained the census and oversaw aspects of the government’s finances) who completed the first section as a military road to the south during the wars against the Samnites, a tribe who lived on the Apennines south of Rome.

The Via Appia is dotted with many interesting historic sites; in Roman times, it was adorned with sumptuous villas and monumental tombs belonging to important Roman families, some of which remain today. In Rome, the first 16 kilometers of the Appian Way are part of the Regional Park of the Appia Antica, located just outside of the city center. A half-day excursion to the park makes for a pleasant time out, far from the city’s bustle, amid nature and archaeological landmarks.

Visiting the Appian Way in Rome

To make the most of your time along the Appian Way, reserve a half-day guided tour, which will highlight the must-see sights for you. The tour starts at Porta San Sebastiano, the largest and best-preserved gate in the Aurelian Walls, which were built in the 3rd century AD to enclose all seven hills of Rome plus the Campus Martius and, on the right bank of the Tiber, the Trastevere district. Originally known as Porta Appia, Porta San Sebastiano houses a small museum illustrating the history of the wall; visitors can walk on the wall itself and enjoy the views.

At the Appian Way’s second mile is the Church of St. Mary in Palmis, better known as Church of Domine Quo Vadis, supposedly built on the site where St. Peter, fleeing persecution from Rome, had a vision of Jesus and asked him the famous phrase, “Domine, quo vadis?” “Lord, where are you going?”.

Passing many ruins from ancient Rome, the Appian Way tour continues to the suburban palace built for Emperor Maxentius, the 58th emperor of the Roman empire who ruled between 306 and 312 AD. Here you will be able to admire the 513-meter long Circus of Maxentius, which hosted chariot-racing courses and is second in size only to the Circus Maximus; it is the best preserved of all Roman circuses. The imperial box of the circus  was connected, via a covered portico, to the villa of Maxentius.

The tour ends at the monumental Tomb of Cecilia Metella, one of the most famous landmarks and best preserved monuments along the Appian Way: it is a mausoleum built in the 1st century B.C to honor Cecilia Metella, the daughter and wife of important Roman politicians. An inscription on the outside indicates to whom the tomb was dedicated.

Catacombs Along the Appian Way

Catacombs can be found along the Appian Way, and your tour includes a visit to either the Catacombs of San Callisto or the Catacombs of San Sebastiano. The Catacombs of St. Sebastian represent one of the smallest Christian cemeteries. Using a staircase, visitors descend to the tunnels to reach the restored crypt of San Sebastiano, with a table altar and a bust of the saint attributed to Bernini. The catacombs include a room used for funereal banquets whose walls still have hundreds of graffiti by the devotees who attended the banquets; and a construction thought to have been the temporary resting place for Peter and Paul.

The Catacombs of St. Callixtus are among the greatest and most important catacombs of Rome; built around the 2nd century, they were the official cemetery for the Christians of Rome. Housing many preserved mosaics and frescoes, they are part of a large complex where martyrs, Christians and popes were buried; a network of underground galleries house the crypt of St. Cecilia and the Crypt of the Popes, also known as “Little Vatican” because it contains the tombs of nine popes and the remains of early saints.

If catacombs and underground monuments are your thing, then you may opt to take the “Underground Rome” tour. The half-day visit starts at the 4th century Basilica of San Clemente, where you will learn about a male-only religion called the Cult of Mithras that existed 2,000 years ago and rivaled Christianity in popularity.  You will then visit the well-preserved Catacombs of Domitilla on the Appian Way; they spread over 17 kilometers of underground galleries and passages, some of which are inaccessible. They contain a precious fresco that is the earliest known depiction of Christ as the Good Shepherd. This tour ends with a short stroll along a stretch of the Appian Way, where you will step on the same stones where Julius Caesar once walked. 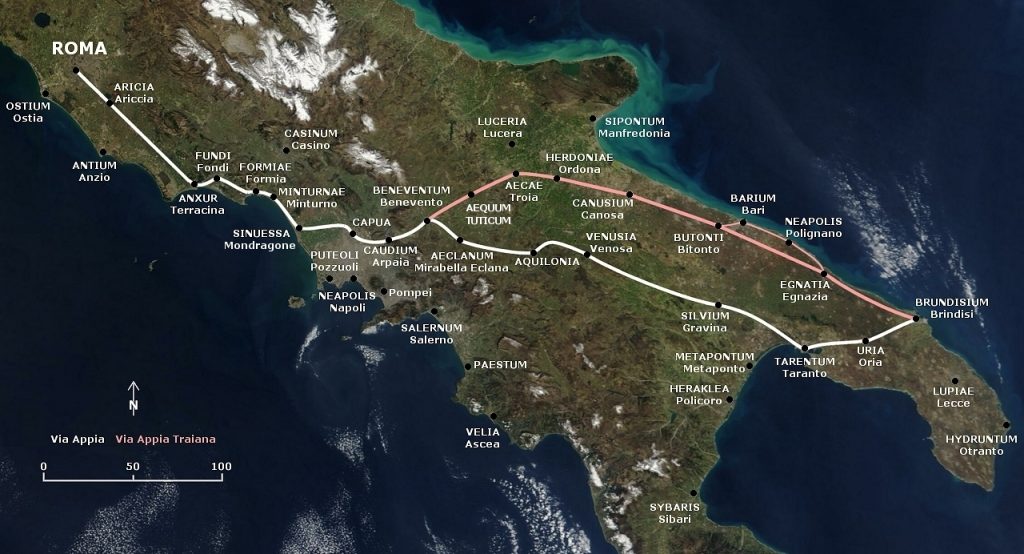 Map of the Appian Way and the later and shorter Via Appia Traiana.