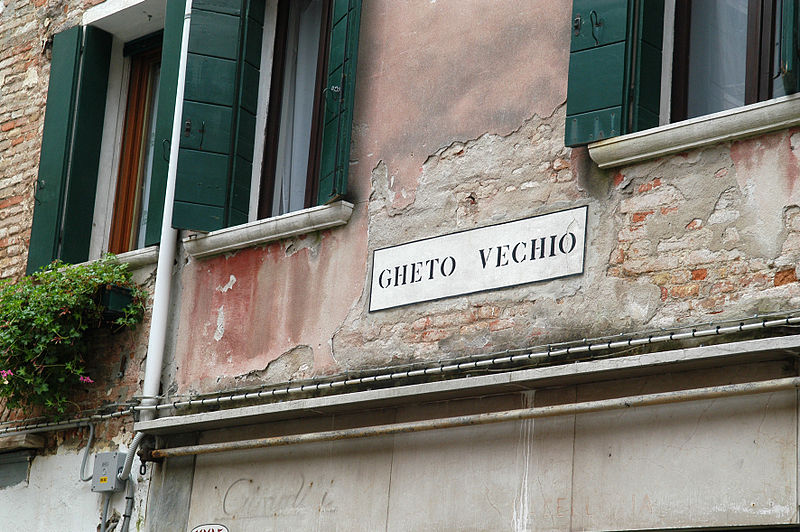 At its height the Venice Ghetto was home to over 6,000 Jews. They were obliged by law to live within the confines of a tiny island in the northern district of Cannaregio and were even locked in overnight. Today the central campo or square at the heart of the ghetto is a glorious sun trap and home to fewer than 500 Jews, but bustling kosher bakeries and businesses still line the streets. How did the ghetto come to be founded in Venice 500 years ago; let’s take a closer look at its history and surroundings.

A thousand years ago the Crusades were brewing in medieval Europe and the Middle East, pitting Christians against Muslims and Jews. The Catholic Church was rising in prominence and increasingly anyone not of that faith was, at best, viewed as an outsider and, at worst, an enemy of the Church. This made life uncomfortable for the 1.5 million Jews living in Europe by the year 1100.

Jews were persecuted, expelled from cities — from entire countries, such as France, Germany and England — and they were forbidden from owning land. The Papal inquisitions of the 13th and 14th centuries further compounded restrictions on Jewish life, therefore, it’s not surprising that Jews were looking for tolerant cities in which to settle, but these were few and far between.

A brief history of the Venice Ghetto

The relationship with Venice began in the 12th century as Jews began to arrive after having been expelled from other territories. Life wasn’t totally rosy in Venice either since there were restrictions on their lives here, too. Jews were only allowed to work in medicine, as second-hand clothes sellers or moneylenders. But, crucially, Venice allowed Jews to stay and gradually the community grew.

Word spread that the lagoon city was a safe haven; in itself a problem since the numbers of refugees rose rapidly. The Catholic Church was vehemently against Jews settling anywhere in Europe and some Venetians were beginning to grumble, too. For the most part the city wanted to help the exiles so had to come up with a solution that would satisfy both camps while enabling the Jews to stay. The result was the formation in 1516 of the world’s first ghetto in the northern district of Cannaregio, well away from the legislative and social heart of the city.

Despite offering shelter from expulsion, however, the Venice ghetto was not a universally welcome solution for several reasons. Jewish residents were legally required to live within the cramped confines of the small island surrounded by canals. They were forbidden to leave the ghetto from dusk till dawn under a nighttime curfew. And they even had to pay for the security guards who locked the gates and patrolled the boundaries during the night!

To learn how the Jews lived, worked and worshipped in this restricted setting, you can book a tour of Jewish Venice and Cannaregio. Your guide will point out key sites including some of the five historic synagogues, the fascinating Jewish Museum and also the poignant Holocaust Memorial that is the centerpiece of the ghetto’s main square. They’ll also explain why the island was called the ghetto, a word that comes from the old Venetian dialect still spoken in the city today, but to discover that you’ll need to take the tour!

The tour also leads you through one of Venice’s hidden gems; the serene sestiere (district) of Cannaregio.

Located along the northern edge of the historic center, this is the second largest zone in the city but probably one of the least explored by visitors. In past centuries it was home to a mix of merchants, ordinary working-class Venetians and light industry including metalworks, artists’ workshops and traditional boatyards. Today it retains a distinctly local feel with narrow, winding streets that are packed with local shops and neighborhood bars where friends and family congregate for a traditional aperitivo after work. If you need plumbing supplies, your shoes repaired or to find the best bar scene in the city, this is the place to come. But it’s also packed with history and well worth a wander.

Your guide will help you to decipher the maze of streets, alleyways and canals that link to the Grand Canal to the south, the train station to the west and St Mark’s to the east. And together you’ll locate some of the key historic and architectural spots, in addition to the Venice ghetto, that make Cannaregio such a wonderful revelation.

Look out for the turbaned statues, camels carved into the facade of a merchant’s ornate palazzo and the corner figure with the iron nose! And follow in the footsteps of one of Venice’s most famous sons, the High Renaissance painter Jacopo Tintoretto, who lived and died in the district. You’ll stop outside his typically Venetian palazzo and nearby workshop, still in use today by engravers and artists. And finally you’ll take in the church of the Madonna dell’Orto where Tintoretto, nicknamed Il Furioso due to his phenomenal work rate, painted several works and was finally buried at the ripe old age of 76.

Talk to our friendly travel experts

Venice is a fabulous city for both a short visit or a long stay, but its so much more than just St Mark’s, the Rialto and the Grand Canal. To discover the true heart and soul of the city and one of the last remaining residential districts where local communities continue to thrive, you really need to get off the beaten track, away from the busy tourist centers. When planning your next trip to this eternally beautiful city, make sure you ask our friendly travel experts to book a fabulous tour of the historic Venice ghetto and the secret Cannaregio district; you won’t be disappointed at the very different side to Venice that you’ll discover. And in the meantime, make sure to leave us a comment with your favorite spots in the ancient, watery city. Buon viaggio and happy travels!