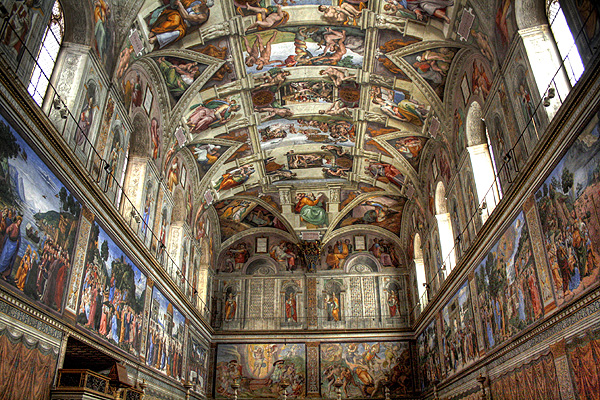 The Sistine Chapel is no doubt one of the world’s greatest artistic treasures; it holds a universal cultural value. You can’t visit Rome and not see it!

The Sistine Chapel is part of the Vatican Museums, which house a vast collection of artistic masterpieces gathered by the Popes throughout the centuries. The museums display some of the most important works of art in the world; for this reason, they are among Rome’s most popular attractions. In fact, approximately five million people a year visit them, roughly 25,000 a day. To save time (and stress) and secure a smooth entry, make sure you buy your Sistine Chapel tickets in advance.

One more tip before your visit: the Vatican Museums are so vast that it is easy to feel overwhelmed and feel like you may be missing the most significant works of art. Rather than going it alone, book a small group guided tour that will introduce you to the marvels of one of the world’s greatest repositories of art, with the added bonus of a guided visit of St. Peter’s Basilica as well.

Read on for an interesting insight into the history of the Sistine Chapel, which we hope will enhance your visit.

1) Why is it called the ‘Sistine’ Chapel?

The Sistine Chapel, or Cappella Sistina in Italian, is named after Sixtus IV, the pope who commissioned it in the 1470s. “Sixtus” in Italian translates as “Sisto.” He hired painters of the caliber of Pietro Perugino, Sandro Botticelli, Domenico Ghirlandaio and Pinturicchio to fresco the two long walls of the chapel: the biblical story of Moses on the left wall, the story of Christ on the right. Even though the Sistine Chapel is mainly known for Michelangelo’s frescoes, it is important to note that this group of artists introduced the early Renaissance into Rome and their paintings do represent one of the world’s greatest fresco cycles. They were completed in 1482, and, on 15 August 1483, on the Feast Day of the Assumption, Sixtus IV consecrated and dedicated the Sistine Chapel to the Virgin Mary, while celebrating the first Mass there.

In 1508, Pope Julius II, the nephew of Sixtus IV, decided to partly alter the decoration of the Sistine Chapel and asked Michelangelo, who was busy working on a marble tomb the pope himself had commissioned, to decorate the ceiling. Michelangelo was reluctant to take on the work: he considered himself primarily a sculptor, not a painter, and would rather focus on the tomb. Yet he accepted and spent the following four years painting biblical stories ranging from the Book of Genesis to the Creation and the story of Noah. When he began in 1508, the chapel’s ceiling was a simple depiction of the night sky, a blue vault with stars, painted by Umbrian artist Piero Matteo d’Amelia. When he finished in 1512, Michelangelo had created a masterpiece with no precedent that would change the course of Western art.

3) Whoever said Michelangelo painted the Sistine Chapel’s ceiling on his back?

Contrary to popular belief, Michelangelo did not paint on his back. He and his assistants actually painted standing upright on wooden platforms Michelangelo himself had devised. These scaffolds were attached to the walls with brackets and were moved through the chapel as needed. Not that they made Michelangelo’s life any easier: he was so miserable painting the Sistine Chapel’s ceiling he even wrote a poem about it, lamenting the physical strain he was under. Interestingly, even though Michelangelo had no way of looking at the work in progress from below, he was still able to paint images on a vast scale from a distance of a few inches. Quite impressive, isn’t it?

4) (Too much) nudity in the Sistine Chapel

Many years after completing the ceiling frescoes, Michelangelo returned to the Sistine Chapel to paint The Last Judgment on the end altar wall. The vast fresco, painted between 1536 and 1541, is one of Michelangelo’s most controversial works. It was denounced for showing too many nude figures. Michelangelo was unfazed. When the pope’s Master of Ceremonies Biagio da Cesena harshly criticized him saying that “it was no work for a papal chapel but rather for the public baths and taverns,” Michelangelo painted Cesena as a demigod of the underworld (Minosse), with donkey ears and a snake biting him in the crotch. In 1564, the Council of Trent demanded that the more explicit nudes be covered up with fig leaves and loincloths. The artist Daniele da Volterra was summoned to the task, which earned him the nickname of “Braghettone,” or “Big Pants.”

5) Popes are elected in the Sistine Chapel

New popes have been elected in the Sistine Chapel since 1492 (as the sole venue only since 1870). During the papal conclaves, the gathering of the College of Cardinals for a papal election, 115 cardinals meet in the chapel after swearing an oath of secrecy, which, if broken, will condemn them to hellfire. Electronic devices are not allowed inside and all cardinals are checked for bugs before entering. Once the cardinals have entered, the chapel’s doors are locked with the words “Extra omnes,” meaning “Everyone else out.” This is where the word conclave comes from: “cum clave” or [closed] “with key.” A special chimney installed on the roof of the chapel signals the election’s progress – or lack thereof: dark smoke indicates that no candidate has yet received the required two-thirds majority; white smoke rises (and bells ring) when the new pope has been chosen.

If you are planning to visit Rome, just get in touch with our travel experts! They can design an experience right for your travel needs.

Do you know any other interesting facts about the Sistine Chapel? Leave a comment below!