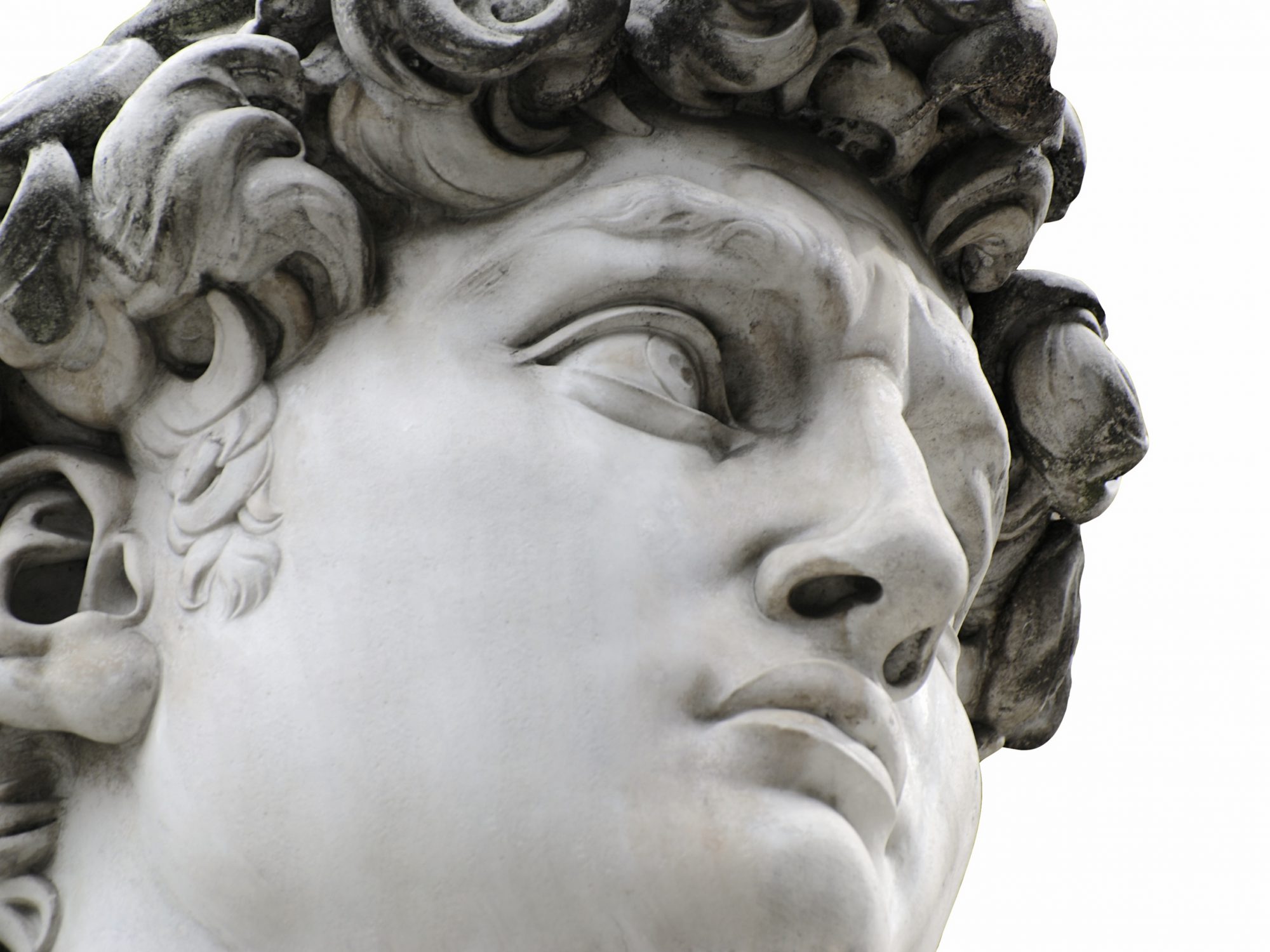 Standing at a colossal 17 feet tall, the gleaming white statue of Michelangelo’s David, slingshot in hand ready to do battle, dominates Florence’s Piazza della Signoria. It draws millions of tourists every year even though it’s just a copy. The original, expertly chiselled by master Renaissance sculptor Michelangelo, nestles safely in a purpose-made gallery of the nearby Accademia di Belle Arti museum. But it’s so much more than a mere statue. So if you are planning a trip to Florence, here are 11 things you didn’t know about Michelangelo’s David and 11 reasons to go to see him.

The young Michelangelo di Lodovico Buonarroti Simoni had been working as an artist since the age of 13 when he entered into an apprenticeship at the workshop of Florentine artist Domenico Ghirlandaio. His teacher Ghirlandaio was a master in fresco, figure drawing and portraits whose work still graces the walls of the Sistine Chapel in Rome. And Michelangelo was a quick learner, ultimately surpassing his teacher in painting, sculpture and fresco technique, hence his commission at such a young age.

At first sight Michelangelo’s masterpiece is a beautiful study of a male nude, but the statue also has a Biblical background; the legend of David and Goliath. The Book of Samuel describes how a young shepherd boy named David stood up against a 9-foot tall warrior giant who had been terrorizing the army of Israel. Goliath the giant was armed with a huge sword and protected by full armor, but the boy faced him armed only by his staff, sling over his left shoulder and a pile of stones. And despite the apparent difference in power and strength, David coolly felled the giant with a single shot to the forehead before beheading him. David has been a poster-boy for the underdog ever since although Michelangelo, ever one to push the boundaries, depicts him as a handsome, healthy young man rather than a skinny young shepherd boy, creating one of Italy’s most instantly recognizable and heroic works of art.

3) Michelangelo was the third sculptor to be commissioned

The first artist to attempt the project was Agostino di Duccio, who started to shape the feet and legs in 1463 but never got any further. Ten years later Antonio Rossellino took over where Agostino had left off but his involvement was short-lived too. Another 25 years would pass before Michelangelo was commissioned, starting from scratch and completing the statue in spectacular fashion.

Carrara marble, a high quality white or blue-grey stone, has been used for statues and buildings for millennia. The ancient Romans used it to construct the Pantheon and Trajan’s Column, the Tuscans built Siena’s beautiful cathedral from it and London’s triumphal Marble Arch is beautifully faced with it.

And Michelangelo was experienced in carving Carrara marble often travelling to the famous quarry in northern Tuscany to personally select his own blocks to suit his work best. But, as Michelangelo was the third artist to attempt the sculpture of David, the marble block had already been bought by the Florence Cathedral more than 25 years earlier. And despite the fact that the block had flaws in it, it was still a massive investment for the Cathedral. Fortunately, Michelangelo could see the potential of the discarded block, imagining the figure locked in the stone, and managed to convince the authorities to give him the project. He started work on the morning of 13th September 1501 and would take just under 3 years to complete it.

5) David was never intended to be viewed close up

When the City of Florence commissioned Michelangelo, they wanted a statue of David to decorate the roof of the enormous Duomo along with 11 other Old Testament heroes including Joshua and Hercules. But when people saw the completed statue by the young artist, they quickly realized that it was both too heavy and too spectacular to be hidden away on the roof. A committee of the Florentine citizens and the artist’s peers Leonardo da Vinci, Filippino Lippi and Botticelli was assembled to assess the best home for David. Nine different locations were considered. And despite much initial disagreement, Michelangelo’s David was finally unveiled on 8th September 1504 at the entrance to the Palazzo della Signoria, Florence’s town hall now known as the Palazzo Vecchio.

6) Michelangelo’s David weighs as much as 80 men

David weighs in at more than 6 tons or 12,478 pounds; that’s the equivalent of around 80 adult men! And at 17 feet tall, or 3 times the height of the average man, there was little possibility of raising the completed statue over 150 feet onto the Duomo’s roof as the technology to lift such a heavy weight didn’t exist yet. In fact the figure was so large that locals nicknamed it the colosso, or giant. And even when a final resting place in the Piazza della Signoria, just half a mile away from his workshop, had been decided upon it still took 40 men 4 days to transport Michelangelo’s David through the Florentine streets to Piazza della Signoria, pushing it over greased poles. It would stay there for three and a half centuries until it was moved to its current location in the Accademia Gallery to protect it from the elements in 1872.

7) David used to be gilded

Or at least parts of Michelangelo’s David were. The original statue was gilded with gold leaf on selected parts including the sling over his left shoulder, the tree stump behind his leg and a golden gilded garland draped around his hips, presumably to preserve his modesty!

8) The statue has been damaged at least twice

When David faced Goliath in the Biblical story, the boy came away unscathed but sadly Michelangelo’s David hasn’t been as lucky. The statue suffered a broken arm just 23 years after it was completed when a political activist threw a chair out of a window of the Palazzo Vecchio during a civil uprising in 1527, breaking David’s left arm in three places. David then survived the next 400 years intact, escaping World War II undamaged despite Hitler’s desire to add it to his art collection and bombing of Florence. And fortunately, although a hammer-wielding vandal hacked a toe off in a rather brutal pedicure in 1991, the statue of Michelangelo’s David remains closely protected in his Accademia Gallery home so we can all enjoy his glory.

9) There is more than one David

The statue that stands in the Piazza della Signoria is not the original carved by Michelangelo, but a copy put there when the masterpiece was moved to the Accademia Gallery in the late 1800s. But Florence’s two Davids are not the only ones in the world. One, for example, was given as a gift to the British Queen Victoria in 1857. Her Royal Highness, however, was shocked by David’s full frontal nudity – it was the age of Victorian prudishness after all – and insisted that a special removable fig leaf be made to protect delicate visitors from his offensive genitalia!

10) The tree trunk behind David’s leg protects the statue

If you look at many sculptures, there is almost always one thing that they have in common; there is a tree trunk or boulder behind the figure supposedly adding a bit of scenery and context to the piece. But in fact, the tree trunk is a technical trick that has been used since ancient times. Sculptors, including Michelangelo, knew that continuing to chisel away at the marble would cause too much stress to the block, sending shock waves through it and causing it to shatter. So next time you look at a classic statue, you’ll know why it has a tree trunk at the back!

Michelangelo took much of his inspiration for his work from ancient art, particularly from the Romans whose sculptures he deemed to be artistic perfection. When it came to sculpting David, therefore, whilst Michelangelo’s design and pose for David were certainly motivated by ancient heroic styles, he purposefully gave his statue a defect as he didn’t deem himself an equal to the Roman masters.

It’s time for you to meet Michelangelo’s David!

The replica of Michelangelo’s David towers over the crowds of visitors in Florence’s Piazza della Signoria. And whilst its certainly a beautiful experience, there is nothing that quite compares to turning the corner into the main room of the Accademia Gallery and catch your first sight of the original. Carved by a 26 year old genius, from a single colossal block of Carrara marble, the figure of David is truly heroic. And it’s beauty would seal Michelangelo’s reputation in both Florence and Rome to such an extent that his next commission was to paint the ceiling of the Sistine Chapel! So if you’re visiting Florence, a ticket to the Accademia gallery to meet Michelangelo’s David has to be top of your list – our travel experts are on standby to help you skip the queues and spend as much time as you like getting to know this timelessly beautiful young man. Ciao bello!