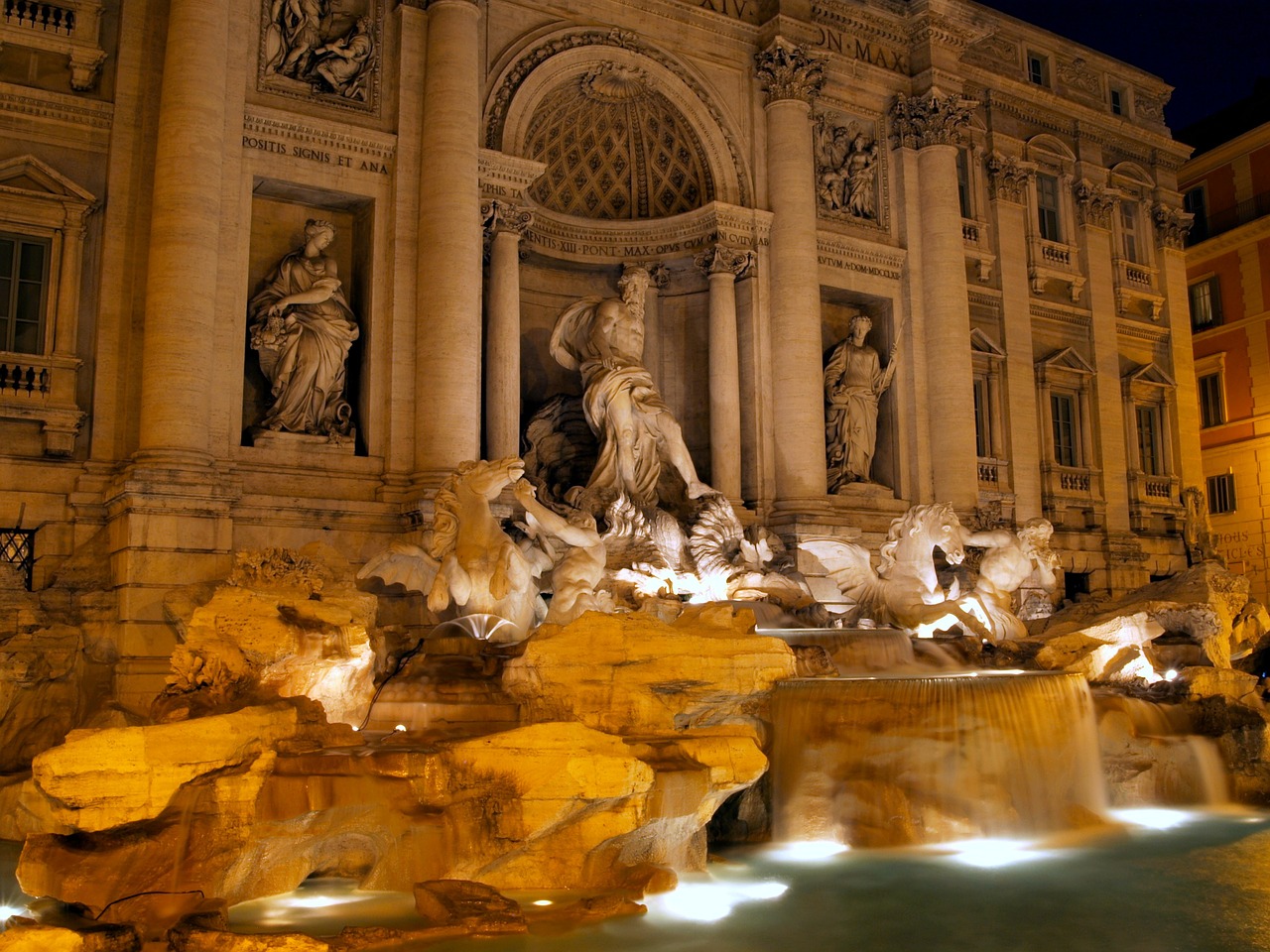 From amazing Italian swimming holes to their cool urban counterparts – Italian fountains beckon with great art and the ever-present promise of refreshment. And they deliver on that refreshment, aesthetically speaking of course. Of course, walking through the hot and beautiful streets of Rome in summer, we could all be forgiven for wanting to have our La Dolce Vita moment, splashing around the Fontana di Trevi like Anita Ekberg did in the famous 1960 movie. Well, we can only do that if we want to risk arrest by the carabinieri…

Read on and get to know 5 of our favorites Italian fountains!

This immense, gorgeous Baroque fountain in the heart of Rome is one of the world’s most loved public places. Mythological ocean figures dominate the dramatic statuary, and the gurgling water itself is the stuff of legend: by throwing a coin into the Trevi Fountain you will (it is said) ensure your return to the Eternal City (an estimated $4,000 are tossed into the fountain’s waters each day). Don’t miss the scene at night, when the fountain is brilliantly illuminated.

When you first set your sights on this enormous fountain on Ortygia island in the Sicilian city of Siracusa, on the site of an ancient seaside freshwater spring, you will smile because you will remember that you may have forgotten just how romantic some spots in Italy can be. Ancient Greek legend holds that Artemis turned the nymph Arethusa into this fountain so she could hold onto her virginity, which was endangered by the randy river god Alpheus. Today papyrus reeds, swans and gorgeous views abound.

Bologna has no seashore, but that makes no difference to Neptune, the Roman god of the sea who takes center stage in Bologna’s beautiful Piazza del Nettuno, home to the ravishing Fountain of Neptune. In Giambologna’s 16th-century masterpiece, the god of the sea lords it over all he surveys – in this case, the gorgeous cityscape of largely intact medieval Bologna.

4. Fountains of the Piazza Navona

Piazza Navona reigns as one of the most quintessentially Italian squares and one of Europe’s happiest public places, regardless of season. This perfect urban space has three famous Baroque fountains, which include Bernini’s Fontana dei Quattro Fiumi or Fountain of the Four Rivers (replete with Roman obelisk) in the center, Fontana del Moro at the southern end and Fountain of Neptune at the northern end. By tradition, you should buy a cup (not a cone) of black truffle gelato at Tre Scalini (no. 28), stand in front of the fountain of your choice and be glad you are in Rome.

File this one under magnificently strange: Catania’s famous “elephant fountain” is as much a symbol of this teeming Sicilian city as adjacent Mount Etna which has flattened it more than a few times. In fact, the elephant figurine, which balances an obelisk on its back, is made from black lava and is said to date from ancient Roman times. But Vaccarini’s fountain itself is more recent, having been completed in 1736.

Have you ever seen one of these Italian fountains? Share your experience with us!