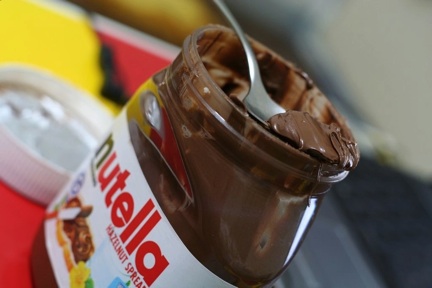 My first experience with Nutella resulted in me giving it up for good. I know, you can all pick your jaws up off the floor; it wasn’t because I didn’t like the product itself. Actually, I usually don’t tell this story, but since February is Chocolate Month, and the fifth was World Nutella Day, I feel compelled to share my encounter with the product.  I was in college, studying abroad for a semester in Rome, when I met the little glass jar of hazelnut-chocolate spread. It was unassuming – no larger than the jelly jars that I was used to digging into to dress my morning toast – and festively decorated with a picture of the 2006 Italian national soccer team fist-pumping in jubilation. At the time, I believed that the celebration must have been for their recent World Cup win, but when I got home and opened the jar, I learned the truth. They were celebrating the amazing contents inside the container they were resting on.

Nutella proper, the one that we know and love today, was not introduced to Italy until 1963, but its origins trace back to Pasta Gianduja, a spread offered in the bakery of Pietro Ferrero in the mid-1940’s, born of a shortage of chocolate in Italy during the war in combination with a continued access of hazelnuts. Not surprisingly, Pietro’s bakery was located in the mecca of Italian fine foods, Piedmont’s Alba, also the home of Barbera wine and the coveted, rare delicacy of white truffles. Pietro’s son gave the product a makeover in the sixties, renamed it Nutella, and shipped it off to countries throughout Europe, achieving instant success.

My relationship with Nutella did not begin in Italy. I had tasted the product in the United States during a high school German-class Frühstück, or breakfast. However, the Nutella made in the United States didn’t captivate me like that in Italy. Perhaps what tips the delicious factor towards the Italian version is the fact that the American version is made with soy products, which the Italian is not, making it more creamy and rich. Either way, the Nutella all’italiana has a sense of joy in every bite

My personal relationship with Italian Nutella was a slippery slope. The first night I opened it was after a hearty dinner of penne, peppers, and sausage to try some with my newly-purchased Macine while absentmindedly watching the American news on my computer stream. At first bite, I melted into a heaven of chocolatey goodness, took a full 60 seconds to appreciate the luxurious taste, and continued on for a second helping. An hour later, I looked down to find that the jar was empty, and the bag half-eaten. The same thing happened a week later, this time with an entire baguette. A few days after that, I attempted to tackle a part of the job with a spoon, but couldn’t stop myself. It was just too amazing – the creamy mixture was not as sweet as most similar spreads in the United States, and the hazelnut flavor was just prominent enough to balance but not overwhelm the chocolate notes of goodness. I couldn’t open the jar and not finish it. In October of 2006, I gave Nutella up for the rest of my stay in Rome (if you don’t count that time in November. Ok fine, times in November, and once in December….I won’t tell all my secrets).

Since the original fateful meeting of my taste buds and Nutella, I’ve learned to put the lid back on the jar. I’m even a frequent-purchaser of the American kind (and luckily, the Italian spread is also available online and at specialty stores around the country or at Eataly’s Nutella Bars in Chicago and NYC. So, in light of this chocolate-honoring, Nutella-praising February, let’s raise our Nutella-covered spoons/toast/cookies/fingers and give another Italian food miracle its due praise. Salute!

What has your experience been with the famed spread? Were you able to put the lid back on the jar?