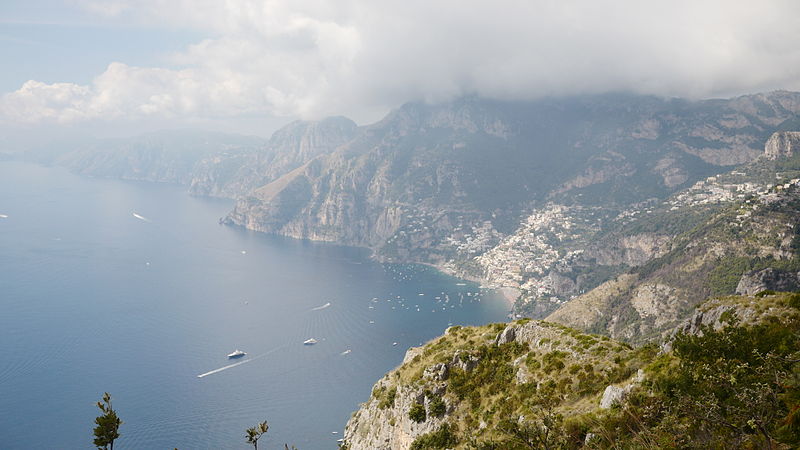 Walk through the clouds on the Path of the Gods

Active travelers will be glad to know that the Amalfi Coast boasts some of the most spectacular hiking trails in Southern Italy; trails that rival—or maybe even surpass—those in the Cinque Terre to the north. Most of the paths along these mountains were originally made by farmers and their mules since walking was the only way to get back and forth between the villages before the coastal road was built in the early 20th century (and you still might run into a mule or two being used to move goods and heavier items).

The rugged Lattari Mountains that loom above the Amalfi Coast are crisscrossed with lots of trails, but one of the most memorable is the Sentiero degli Dei (Path of the Gods) that hugs the coast, overlooking the Mediterranean—the out-of-this-world views from way up here will have hikers reaching for their camera at every bend in the road! This particular path starts above Amalfi and can end by descending all the way to Positano; at a leisurely pace, the 7.8 kilometer (4.8 mile) trek usually takes around two and a half hours and it’s best to start early, before the sun is high in the sky. Of course, the definition of “early” depends on the time of year: one Select Italy client this season did the trek in late July and he began at 7:30am; cooler temperatures in September and October will allow for a 10am start, with a rewarding lunch waiting at hike’s end.

Some bits of the Path of the Gods are rocky, but the rest is relatively easy, although the frequent ups and downs can be hard on the knees. The path stays roughly at 600 meters (1,968 feet) above sea level and, in places, it is nothing more than rough gravel with steps made from granite rocks. Hikers are often separated from the edge by a rickety excuse for a fence (or nothing at all). Quite a few stretches of the path have alarming drop-offs, but at no point should hikers feel unsafe, unless they suffer from vertigo or have an overwhelming fear of heights. With breaks for water and snacks, the hike is strenuous but doable, and everyone that does it feels more than repaid by the magnificent views! 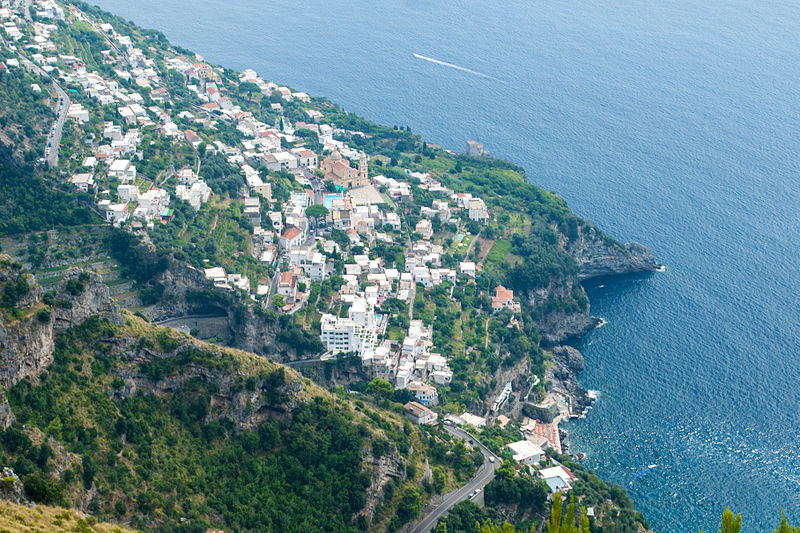 Village of Praiano slopes down the hillside into the sea (credits: Mihael Grmek – Wikicommons)

Select Italy will be happy to arrange everything you need for a sublime hiking experience on the Amalfi Coast, however, there are four main things you should know in advance:

1. A vehicle is needed to get to the starting point

Yes, it’s possible to begin the hike at sea level in Praiano and end it on the beach in Positano, but be aware that there are 1,900 steps (count ‘em) UP to the Path of the Gods from Praiano and 1,700 steps DOWN to Positano at the end! Unless you’re a mountain goat, this is just not worth it—why start the most scenic part of the trek aching and out of breath when you don’t need to?

The most convenient way to begin the hike is by private transfer to the Bomerano trail-head, right outside the tiny hilltop town of Agerola. The route runs gently downhill from here, with stunning views of the Amalfi Coast and the island of Capri. We can set up a transfer for drop-off at the trail-head, or for both a drop-off and a pick-up in Nocelle above Positano where the trail ends. This is also the least expensive option if you are hiking with a small group.

Instead of being picked up in Nocelle at the path’s end, many of our customers continue along a recently constructed lane for about ½ mile to La Tagliata Restaurant. Here they sit down for a delicious, multi-course lunch on the panoramic terrace with its marvelous view of the sea and the isle of Capri. And an extra perk is the restaurant’s free drop-off service to the center of Positano after lunch, meaning they skip the 1,700 step staircase to get back to their hotel!

2. A guide isn’t really necessary but can be nice

The route is marked by white and red signs with 02 on them that have been painted on certain landmarks such as rocks, however, the quality of the signage varies—in places it can be just a tiny, inconspicuous sign or a splash of paint that looks like an arrow. Everyone agree that the entrance to the Path of the Gods at Agerola is well marked so there shouldn’t be any problem going it alone. Some hikers have commented that having a local guide along really enhances the experience (one guide’s commentary was described as“mesmerizing”); contact us if you’d like to book an experienced nature guide to accompany you on the hike.

Hiking boots aren’t necessary, but sturdy shoes with non-slip soles are. Thick cotton athletic socks are a good idea to cushion your feet; so is a hat for protection from the sun. Wear lots of sunscreen and bring more. Bring plenty of water, bring some cash and don’t forget to bring a camera—it’s essential to capture the gorgeous views and make everyone back home jealous that they weren’t there!

4. Don’t go if there’s any threat of rain

As any sailor can tell you, the weather along the Amalfi Coast can change in a flash so be sure to check the weather predictions before starting out.

Have you ever hiked the Path of the Gods? Leave a comment to tell us about your experience.

A Weekend in Cinque Terre at Villa Valentina

by Francesca Cinque Terre For the 4th of July weekend, I decided to visit the Cinque Terre. It had been...