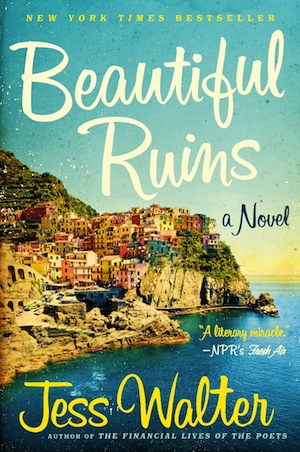 We get some of the most interesting phone calls at Select Italy. Everything from fascinating personal histories (for which we know why we’re assisting in the travel planning) to seemingly randomly connected (but connected all the same) business proposals. A recent phone call from Barbara Goodman of the Wilmette Public Library was one such a call, which ultimately led us to partner with the library for their “One Book Everybody Reads” 2013 program. The selected book is Jess Walter’s Beautiful Ruins, which is set in a wide variety of eras and locations, including war-torn Italy, 1962 Cinque Terre and Rome, modern-day Hollywood, and a few spots in between. As the Director of Business Development here at Select Italy, I organized our support to come in the form of an hour+ discourse on Cinque Terre. My colleague, Martina, and I will be painting a picture of the “Five Lands” for the library’s “Armchair Travels” program at 1pm on April 4th, and again for their “One Book” program at 7pm the same day. To properly prepare for the presentation, many of our staff read the book. So here is a quick recap and review from yours truly.

The story traces interactions stemming from a series of 1962 visits to a small pensione in the fictional Ligurian village of Porto Vergogna (port of shame). The cast of characters includes Pasquale “Pat” Tursi, an Italian inn owner and Dee Moray, an aspiring Hollywood starlet who is recovering from a mysterious illness, in addition to a number of colorful fishermen, moviemakers, soldiers, prostitutes, and the leads’ families. The Italian scenery travels from Porto Vergogna near the Cinque Terre to other Ligurian sites, Florence, and Rome for the filming of the famous Cleopatra, with the dramatic Liz Taylor and Dick Burton. The Italian language is sprinkled throughout as the characters proceed through their lives, with both disastrous and amusing moments along the way. As the book progresses, the story jumps with little difficulty between the different decades and locations. Walter’s characters are developed such that interactions are easily believed to weave seamlessly over time and space.

I enjoyed the story equally for the Italian scenery and the characters that personify one of my favorite characteristics of Italian culture: the beauty of imperfection. This idea is at the heart of the story, applied to places, people and things. An “adequate view,” a crumbling inn with a doomed tennis court, an actress who never saw the glory she deserved, the imperfect three dimensional side of celluloid idols, the false “cool factor” of the clothes we put on each day, and the failing, propped-up flesh we live in. Italian culture and history, like the highlights of Beautiful Ruins, shines for how unflinchingly and unapologetically it shows both good and bad sides. While it is a brutally honest approach, it also demands respect from the reader or admirer. After many an Italy travel memoir I’ve read in the last few years describing the charms of the Bel Paese through rose-tinted and starry-eyed perspectives, it was refreshing to read of my adopted, second homeland through grittier but clearer visions, even in a fictional story.