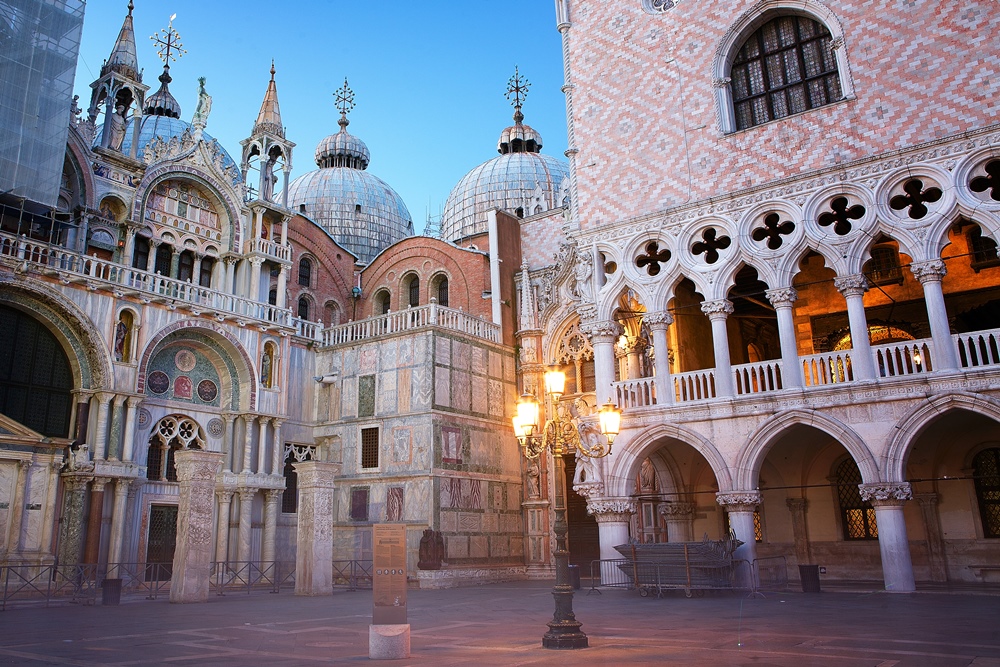 Churches are a common feature along Venice’s canals and in her many beautiful piazzas. From the world famous St. Mark’s Basilica, to the imposing Santa Maria della Salute at the mouth of the Grand Canal, to the church of the Frari which houses High Renaissance artist Titian’s greatest work, there are around 139 consecrated churches to visit. And while many are well-known tourist attractions, there are plenty of hidden gems that harbor artistic masterpieces and religious relics just waiting to be discovered. So if you are planning a visit to the lagoon city, which ones should be at the top of your wish list? Let’s have a look at where to find the best churches in Venice, including some local favorites.

When choosing which churches in Venice to visit, there are a couple of useful things to know. For example, many of the city’s churches and chapels, including even the city’s largest buildings such as the Salute, are open to the public free of charge throughout the day, enabling independent visits at your leisure. Some, however, operate limited opening hours or charge a small fee to contribute towards the upkeep of the building, artwork or religious ministry. If you, like me, enjoy learning about the history of a church, its foundation and its artwork, why not talk to our expert travel consultants? They will book you a private tour with an expert local guide who can really bring Venice’s fascinating history to life.

So, assuming you don’t have enough time to visit all 139 churches, here are our must-see suggestions to put on your list.

The Basilica of St. Mark

It doesn’t take a genius to realize that Venice’s cathedral, the Basilica of St. Mark which sits beside the Doge’s Palace, has to top your list. Every inch of interior wall space is covered in tiny Murano glass tiles that form a breathtakingly opulent golden mosaic. giving it the nickname of “Chiesa d’Oro” (golden church). Add in the jewel-encrusted Pala d’Oro altar screen, the bones of Mark the Evangelist that were carried here from Alexandria and the four ancient bronze horses captured from Istanbul when it was still Constantinople, and you have a massive Byzantine status symbol that attests to the wealth and power of the Venetian Republic. It’s a truly historic church and a must-see for any visitor.

Known to locals as the Frari, this Gothic church is dedicated to the Assumption of the Virgin Mary and is one of the most important churches in the city. Opened by Franciscans in 1338, the imposing brick basilica has a simple exterior but houses several Renaissance masterpieces of art, as well as the last remaining wooden rood screen in Venice and the funerary monuments of several Doges, artists Titian and Canova and other local luminaries. But it’s for Titian’s glorious, 16th century painting of “The Assumption of the Virgin,” towering 24 feet above the altar, and Giovanni Bellini’s stunning “Madonna and Child” in the sacristy, that many visitors make the pilgrimage. Don’t forgot to add this one to your list.

The Church of San Pantalon, Dorsoduro

From the sumptuous grandeur of St Mark’s and the artistic heritage of the Frari to the first of our tiny hidden gems, the Church of San Pantaleone Martire. Located in the Dorsoduro district, just across the canal from the bustling Campo Santa Margherita, San Pantalon, as it’s known to Venetians, looks like an ordinary, 17th century parish church. But step across the threshold, find the light switch and you’ll instantly understand why this little nugget is on the list.

As your eyes become accustomed to the dark interior, they are drawn upwards to the immense painting that covers the entire ceiling of this church. Painted on canvas by Gian Antonio Fumiani between 1680 and 1704, when he fell to his death from the scaffolding, the ceiling depicts the martyrdom of St Pantalon. It’s a gloriously dramatic trompe-l’oeil masterpiece and a simply spectacular addition to your wish list of churches in Venice.

Shaped like a vaulted treasure chest and built completely out of pastel colored marble, reputedly left over from St Mark’s, the Miracoli holds a special sentimental value for Venetians. Built between 1481 and 1489 by architect Pietro Lombardo, it was designed to house a portrait of the Madonna that locals believed had miraculous powers. Today the beautiful, little church with its unique raised altar is the venue of choice for many weddings, both for locals and visitors, and an architectural masterpiece to add to your list of must-see churches in Venice.

Church of Santa Maria Assunta, aka the Gesuiti, Cannaregio

Known simply as the Gesuiti, this church is classically Baroque in style and consequently divides visitors; some absolutely love its ornate, exuberant decorations while others find it over the top. Either way, no one can deny the skill and artistry that has gone into building this wonderful edifice.

Statues of several saints and apostles adorn the glistening, white stone façade. But nothing prepares you for the gloriously elaborate green marble inlay that awaits inside. It looks like the most beautiful William Morris wallpaper or brocade and is everywhere you look, covering not just the floor but the walls, the altar and is even draped over the pulpit like a soft, velvet curtain. This visual illusion in marble is all the more magnificent for having been completed over 300 years ago and is so spectacular that it almost overshadows Titian’s great painting, the “Martyrdom of St Lawrence,” which depicts the saint being burned alive. This is a personal favorite and a definite recommendation.

Perched on the narrow Punta della Dogana at the mouth of the Grand Canal, the church of Santa Maria della Salute is one of the most iconic churches on Venice’s skyline. Its dome appears in masterpieces by artistic greats including Canaletto, Turner, Sargent and Guardi but few people know that it was constructed to give thanks to the Madonna for Venice’s salvation from the great plague of 1630. The church itself is a vast, octagonal building built on one million wooden piles drilled into the soft mud of the lagoon. At its height stands a statue of the Virgin presiding over the city and inside, eight chapels radiate around the central lantern and dome. The church’s steps make a great spot to soak up some summer sun while watching the gondolas and vaporetto water buses plying their trade up and down the canal. Make sure to light a candle to give thanks for good health when you visit and you’ll be assured of another year of wellbeing in return.

Designed and built by the legendary architect Andrea Palladio between 1566 and 1610, San Giorgio Maggiore is a brilliant white basilica in the High Renaissance style. Its gleaming colonnaded façade dominates the skyline, facing the Doge’s Palace and Riva degli Schiavoni waterfront. And inside you’ll find masterpieces by Tintoretto, including “The Last Supper” and “The Fall of Manna,” together with contemporary sculptures and artworks. But the highlight of a visit to San Giorgio Maggiore has got to be a trip to the top of its bell tower for the best view over the city’s rooftops. It is absolutely stunning and, fortunately, there is now a lift to get you to the top!

And finally, to visit one of the most ancient religious buildings in the Veneto region, head out to the island of Torcello, one of the first to be settled in the lagoon. Originally consecrated in 639 AD, the cathedral is a fine example of Venetian-Byzantine style with a decorated façade and portico. Inside, a beautiful geometric marble inlay floor, showing eastern influences, greets the visitor. The most important artworks, however, are undoubtedly the mosaics that depict biblical stories including the Crucifixion, Last Judgment and Hell that are the earliest remaining in the whole of Venice. A visit to this tranquil little island in the heart of the lagoon is a wonderful way to glimpse life as the earliest Venetians must have seen it; don’t miss out on this one!

Where to find the best churches in Venice

With a total of around 250 consecrated and deconsecrated churches across the city, Venice has a plethora of styles and artistic masterpieces to offer the curious visitor. So if you like the intricate detail of St Mark’s golden mosaics, the soaring ceiling of San Pantalon, or the stylish simplicity of Palladio’s San Giorgio Maggiore, you won’t be disappointed by the churches in Venice. Leave us a comment with your favorite church or chapel and, in the meantime, whether you prefer the art, architecture or simple spirituality of the churches in Venice, we’re sure you will find some real gems on your next trip. Happy travels!