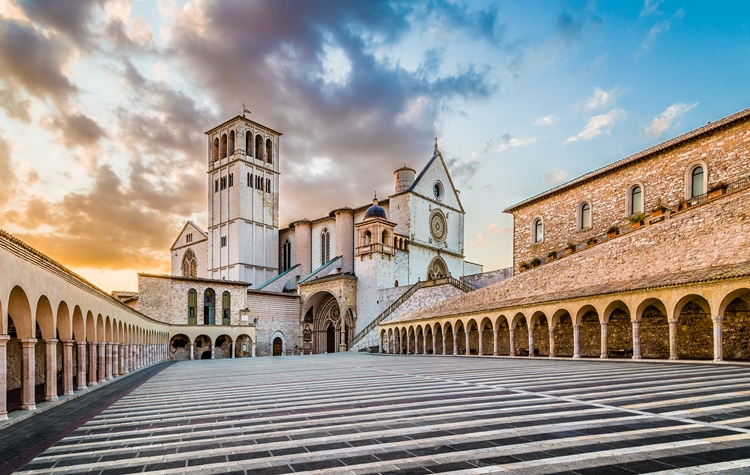 In the 13th century, a wealthy young man from Assisi began questioning the decadence of the Catholic Church and of society as a whole, preaching poverty and a simple life closer to nature instead. That man would become one of the world’s most popular and beloved saints, St. Francis of Assisi, the founder of the Franciscan order and, since 1939, the patron saint of Italy.

Regardless of one’s religious beliefs, the story of St. Francis of Assisi is fascinating. A great way to learn more about his life is to visit Assisi, the delightful little town where he was born, as well as the beautiful Umbrian countryside that  surrounds it.

Opt for a guided tour of Assisi to see the places where Francis himself lived and be inspired by the stories your guide will recount of his extraordinary life, which led him to be canonized just two years after his death.

What to see in Assisi

A must on any Assisi tour is the magnificent Basilica of San Francesco that houses Francis’s tomb. Consisting of two churches, the lower Basilica and the upper Basilica, the building was constructed starting in 1228, right after Francis’ canonization, and completed in 1253. The lower church, which is Romanesque in style, features extraordinary frescoes by the late-medieval artists Cimabue and Giotto and contains the saint’s tomb, carved right into the rock of Mount Subasio (Assisi stands on the slopes of this mountain, whose pink colored stones were used for many buildings in town). The upper church is Gothic, full of light, and houses frescoes depicting scenes from the life of St. Francis.

The Basilica of San Francesco is one of the most important places of Christian pilgrimage in Italy and a UNESCO World Heritage site. The Basilica was badly damaged during an earthquake that struck the area on September 26th, 1997; part of the vault collapsed, killing four people inside the church and destroying a fresco by Cimabue. The building underwent a painstakingly, two-year restoration.

Another must-see stop on any Assisi tour is the Chiesa Nuova, a church built in 1615 on the site of the presumed birthplace of St. Francis, the house of Pietro di Bernardone, Francis’s father, a rich merchant whom Francis renounced, along with his inheritance, to live in poverty. The building was erected after the Spanish Vicar General of the Franciscans, on a visit to town, saw that the original home of St. Francis was becoming dilapidated and decided to raise funds to save it.

Assisi was the birthplace of another important religious figure, Saint Clare, a close friend of St. Francis’ who was one of his first followers. She founded the Order of Poor Ladies (commonly referred to today as the Poor Clares), a monastic religious order for women in the Franciscan tradition; their headquarters is the early Gothic Basilica of Santa Chiara where Clare’s tomb is housed.

The church also preserves the venerated, 12th-century crucifix known as the San Damiano Cross, to which St. Francis was praying when he is said to have been asked by God to rebuild the crumbling church he was in – the Church of San Damiano – that today preserves a replica of the cross in its original position. Franciscans cherish this cross as a symbol of their mission from God.

The Assisi Cathedral, known as Duomo of San Rufino, built in Umbrian Romanesque style, is important in the history of the Franciscan order because it was here that Saint Francis (1182), Saint Clare (1193) and many of their original disciples were baptized.

Four kilometers above Assisi, in a steep forest gorge on Mount Subasio, stands the Eremo delle Carceri, a small monastery with a church where St. Francis retreated and preached to birds. Many would later follow him to the mountain, settling in isolated caves to pray; buildings were added throughout the centuries and the site became known as Santa Maria delle Carceri after the small “prisons” occupied by friars (‘carceri’ comes from the Latin ‘carceres‘ and means “isolated places,” as well as “prisons”). The convent is still occupied by Franciscan nuns.

It is fitting to conclude a tour of Assisi at the majestic Basilica of Santa Maria degli Angeli, the seventh largest Christian church and the beginning and end of St. Francis’ earthly mission. The basilica was built in the Mannerist style between 1569 and 1679 on the site of the 9th century ‘chiesetta’ known as Porziuncola, which is the place where young Francis understood his vocation and renounced the world to live in poverty and preach his message of non-materialism, compassion and love of nature, thus starting the Franciscan movement. It is the most sacred place for the Franciscans.

The Porziuncola is also the place where, in 1226, Francis died, leaving a legacy of humanism and equality that anticipated the Renaissance movement.

*If you are staying in Florence, take advantage of the full-day, small group tour of Perugia, Assisi and Lake Trasimeno for a wonderful day that combines countryside, cultural sites, art, lake views, rolling hills and religion.