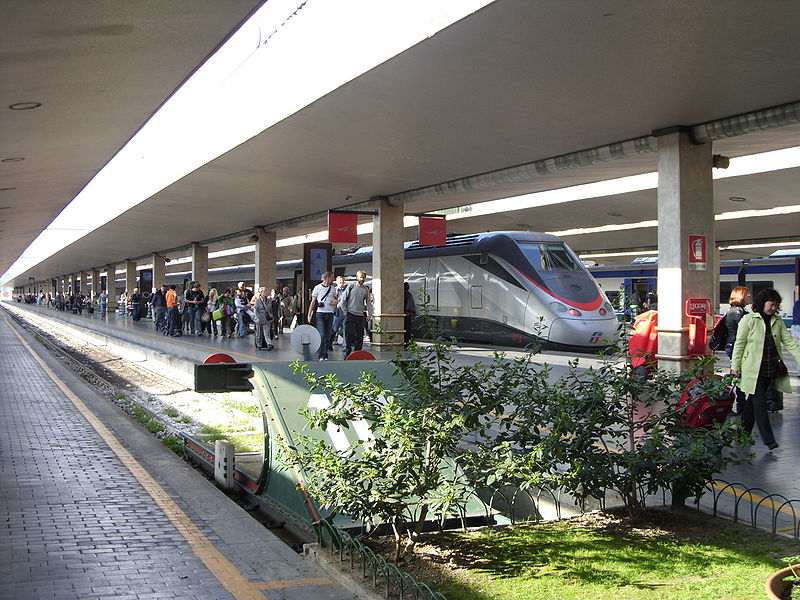 Bologna, “the Learned, the Fat, the Red” as it is affectionately nicknamed, makes for a great day trip from Florence. Travel time on the high-speed train from Florence to Bologna is less than 40 minutes.

Bologna, whose Roman street plan and medieval center have been well preserved, is famous for its rich culinary traditions, signature red roofs and for being home to the oldest university in the Western world (hence the nickname).

Here’s what you need to know when planning to take the train from Florence to Bologna.

Traveling by train from Florence to Bologna

To avoid lines at the ticket counter and to be sure you’ll be able to travel at your desired time, buy your train ticket in advance by calling 800-877-1755

Remember, reservations on Le Frecce trains are required because a seat must be assigned; therefore, it makes sense to purchase your ticket beforehand.

Florence’s main station is Firenze Santa Maria Novella. A great example of Italian modernist architecture from the 1930s, it takes its name from the Santa Maria Novella church across the square to the right from the entrance. Santa Maria Novella, which is one of the busiest train stations in Italy, is right in the city center, so if you are going to Bologna just for the day and therefore have no luggage with you, you are likely to be able to walk from your hotel. Otherwise, it is a short taxi ride from anywhere in the historic center. Just consider that traffic in Florence can be heavy, therefore give yourself plenty of time. Many bus lines also stop by the station.

Bologna’s main station is Bologna Centrale, a major hub for northern Italy’s rail lines. High-speed trains traveling to and from Milan, Venice, Florence and Rome all pass through Bologna Centrale station, which is one of the busiest in Italy. There are two levels of railway tracks within the station complex: Bologna Centrale and Bologna Centrale AV alta velocità (high speed), which was recently built underground. That is where you will arrive and depart from when traveling on Le Frecce trains. The high-speed station is connected by a series of walkway and elevators to the central part, with signs clearly indicating the way. Transfer time is approximately 10 minutes on foot.

Train route from Florence to Bologna

Florence is 65 miles (104 km) from Bologna. Trains from Florence to Bologna depart frequently, as this route is popular both with tourists moving among northern Italian cities (as mentioned above, Bologna is a major railway hub) and with Italians commuting for work.

From Firenze Santa Maria Novella, Le Frecce trains leave for Bologna Centrale 3-4 times per hour, with the most frequent in the morning, for a total of 42 high-speed trains per day. The first Frecciarossa train leaves Florence at 6:53 a.m.; the last train leaves at 10:00 p.m. The average travel time is 35 minutes.

There are no intermediate stops when traveling by train from Florence to Bologna on Le Frecce. You will not be able to see much of the landscape between the two cities as most of the train journey is underground. This is because to reach Bologna from Florence you have to pass through the Apennine mountains. But the journey is so quick you will not have time to get bored! Should you need it, Wi-Fi connection is available on Frecciarossa trains.