Following is a round-up of some of the best Christmas markets in Italy, from north to south.

Feel the holiday spirit at Bressanone’s mercatino di Natale, one of South Tyrol’s five original Christmas markets, along with Vipiteno, Merano, Brunico and Bolzano. Located 40 kilometers north of Bolzano and 45 kilometers from the border with Austria, Bressanone is the cultural and artistic capital of the Isarco valley and the oldest town in the province, dating to at least 901. The Christmas market is held in the beautiful Cathedral Square, overlooked by the two towers of the Cathedral built in 980 AD. It features almost 40 stalls selling beautiful artisanal Christmas decorations, wooden sculptures, hand-made ceramics, candles, glass balls, angels, Tyrolean Christmas items, local food specialties, and more. For a luxurious stay, check in at the Adler Dolomiti Spa Resort in the popular town of Ortisei, located nearby in Val Gardena; or, if you’re looking for isolation and relaxation, head to Vigilius Mountain Resort, located at almost 5,000 feet of altitude in a car-free zone reachable only by cable car.

Bolzano’s mercatino is set against the backdrop of the Rosengarten Dolomites, in the city’s central Piazza Walter. It offers as many as 80 stalls, showcasing only locally produced crafts, including wooden statuettes, decorative candles, hand-crafted Christmas balls, and a variety of local treats, from mulled wine to apple fritters, from apple juice to strudel cake. Take a look at the Nativity Scene, set up under the Christmas tree, inside a real miniature stable, made of wood and covered by a shingle roof (just like the local mountain huts), where the Holy Family, with a cow and a donkey to their side, takes center stage. This is also one of the most kid-friendly Christmas markets in Italy, with several children’s attractions, such as the miniature train, the merry-go-round, the puppet theater, the horse-drawn carriage, and the stalls offering kids’ entertainment. Looking for a great place to stay? Head to the four-star Park Hotel Laurin, located in the heart of Bolzano, and close to the city’s main attractions, from the elegant boutiques to the Otzi Museum.

Over the years, the mercatino in Trento, one of the most famous Christmas markets in Italy, has expanded and is now held in two of the city’s squares, on Piazza Fiera, next to the city’s medieval walls, and Piazza Cesare Battisti. There are about 90 stands offering traditional decorations and nativity scenes, as well as gourmet goodies and a foodie journey through “I sapori del mercatino,” the flavors of the Christmas Market, which allows you to discover the local delicacies. Since you’re in Trento, don’t miss the chance to pay a visit to Cantine Ferrari, which, over 100 years ago, changed the history of sparkling wine when it pioneered the very first Champagne-method wines using Chardonnay in Italy. Other must-see attractions in Trento include the Muse Museum, a science and natural history museum designed by world-renowned architect Renzo Piano and featuring high-tech, hands-on fun exhibits; the imposing 13th-century Buonconsiglio castle; and MART, the Museum of Modern and Contemporary Art of Trento and Rovereto.

Head toward the lake region for a glimpse into a lesser-known Christmas market offering plenty of entertainment. The streets of Arco, on the shores of beautiful Lake Garda, are filled with tiny wooden huts displaying stars, toys, dolls, books, ceramics and glass objects, wooden statues, candles, chocolate and sweets; its palaces project the Advent Calendar on their facades; a special Christmas train takes families for a tour around town with a chance, for the little ones, to meet Father Christmas and his reindeers. On December 8, the feast of the Immaculate Conception in Italy, a special firework display takes place in the castle overlooking the town, while in the nearby village of Bolognano d’Arco, 50 nativity scenes decorate the streets. After a full day of browsing stalls and tasting local foods, relax in the spa of the Lefay Resort & Spa, which is considered one of Europe’s best spas, located on the western shore of Lake Garda.

The most romantic of all Christmas markets in Italy? The one held in the city of Romeo and Juliet! Every year, Verona hosts the Nuremberg Christmas market in its central Piazza dei Signori square. A German-style Christmas Market, it showcases wooden stalls selling handicrafts, decorations, regional foods, and German specialties. Stroll the decorated streets, illuminated by hundreds of light, and reach Piazza Bra to admire the large comet sculpture, and the Arena, where nativity scenes are on display. What’s better than a romance-inspired tour when you’re in the city of romance? Follow a city tour with one of the area’s famous wines, those produced in the Valpolicella wine country, with a visit to a local winery followed by a traditional lunch. Looking for a special stay in Verona? Try the elegant Allegrini Luxury Apartment, located in the heart of Verona.

When: end of November to end of December.

Dubbed “il paese di Natale”, Sant’Agata Feltria has one of the most picturesque Christmas markets in Italy. Narrow alleys lead you up a steep hill to the medieval fortress and the ancient part of the village, which, for the holidays, is turned into a miniature Christmas village, complete with Father Christmas, his reindeer and his elves, waiting for children to show up with their letters. Stalls attract with their displays of scented candles, mistletoe wreaths, hand-made statuettes and the local formaggio di fossa. There are also traditional nativity scenes along the streets, music performances in the ancient theater and special Advent menus in the local restaurants. Want to better discover the beautiful Marche region, which some consider ‘the next Tuscany’? Here are a few ideas for you.

When: last Sunday in November, 8 December and every Sunday in December prior to Christmas Day.

If you have a passion for nativity scene statuettes, this is the best of all Christmas markets in Italy for that. It is centered around Via San Gregorio Armeno. Neapolitan artisans are said to make the best nativity scene terracotta statuettes in Italy, passing down their skills from generation to generation. Statuettes range from classic nativity characters – the Virgin Mary, Saint Joseph, baby Jesus, the Three Wise Men – to figures of the Neapolitan tradition – the fisherman, the wine maker and the two old friends, zi’ Vicienzo and zi’ Pascale – and even politicians and international stars. Nativity scenes are an old tradition in Naples, dating back to the 11th century, when the first presepe is recorded. For more nativity scene inspiration, visit the Church of San Lorenzo Maggiore, with its tiny nativity scenes set inside walnut shells, Piazza San Gaetano for living nativity scenes, and the Museo di San Martino, which hosts Naples’ largest collection of nativity scenes and statuettes. A great way to get acquainted with Naples is to go on a tour of the city’s highlights, from the Royal Palace to Piazza del Gesù, from Castel Nuovo to Galleria Umberto, and to catch an opera show at the famed Teatro San Carlo.

For a Christmas market with a Southern Italian flair, check out Lecce’s Fiera dei Pupi di Natale, where the stands of local artisans display a large selection of paper mache nativity scene statuettes, puppets and accessories to decorate the home. There are statuettes and elements of all kinds, from houses and animals to the classic characters to people representing ancient crafts and jobs. Charming Lecce has been dubbed the ‘Florence of the South’, and the Christmas market is a perfect opportunity to discover this city rich in artistic treasures displaying the local Baroque style. For a one-of-a-kind stay, try the Masseria & SPA Luciagiovanni, a boutique resort blending the century-old traditions of the Salento with the exotic Moorish art of Northern Africa, with a dose of Western-style luxury thrown in.

When: December, until the 24th (opening day tbd). 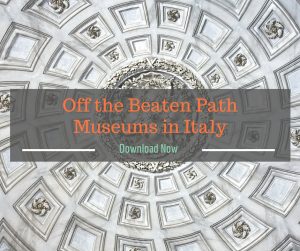 Which Pasta Is On Your Plate? (Pasta Corta)

Pasta in italy is one of the staple foods along with espresso and wine. Pasta has a story for each...