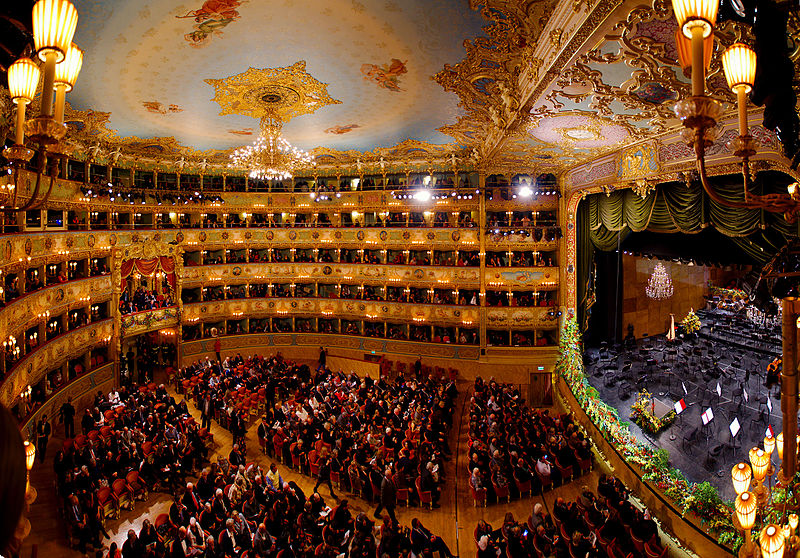 Opera season is in full swing at Venice’s leading opera house, the world-famous La Fenice, and the chance for you to spend a magic night at the opera in the city of canals and romance is closer than you think!

Tickets for La Fenice can easily be bought on Select Italy’s website. Here’s how you do it:

Some of the operas on calendar include La Traviata, Il barbiere di Siviglia and Norma.

Now, either before or after you get your tickets for La Fenice, discover the unique history behind this legendary opera house.

What’s the story behind this prestigious theater that burned to the ground three times, and each time was restored to its former glory? The name chosen for it sure is appropriate: just like the Phoenix (la Fenice), the bird of Greek mythology that is cyclically regenerated or reborn, La Fenice has been able to ‘rise from the ashes’ time and again.

In 1774, the Teatro San Benedetto, which had been Venice’s leading opera house for more than 40 years, burned to the ground. It was therefore decided that a new spectacular opera house would be built. The architect commissioned with the design, Gianantonio Selva, opted for a neoclassical style building with 170 identical boxes in tiers set in a horseshoe-shaped auditorium, which had been the traditional style in Venice since the 17th century. The house would face a campo (small square) on one side, and a canal on the other, with an entrance giving direct access backstage and into the theater.

Construction began in 1790, and was completed two years later. It was then that it was named ‘La Fenice’. The new theater was inaugurated on May 16, 1792, with an opera by Italian composer Giovanni Paisiello titled I giuochi d’Agrigento.

It was not long before La Fenice acquired a reputation in Italy and abroad. In the 19th century, La Fenice became the site of many famous opera premieres and four of the era’s major composers – Rossini, Bellini, Donizetti, and Verdi – staged their operas there.

Gioachino Rossini, one of the most popular opera composers in history, mounted two major productions at La Fenice: Tancredi in 1813 and Semiramide in 1823. Vincenzo Bellini, the quintessential composer of the Italian bel canto era of the early 19th century, premiered two operas: I Capuleti e i Montecchi in 1830 and Beatrice di Tenda in 1833. Gaetano Donizetti, who, along with Rossini and Bellini, was a leading composer of the bel canto opera style in the 19th century, staged Belisario in 1836.

That same year, in December, La Fenice was destroyed by fire. It was quickly rebuilt following the  design provided by the architect-engineer team of brothers Tommaso and Giovanni Battista Meduna, who would give the theater its signature gilt decorations. Thus, La Fenice rose from its ashes again and re-opened on the evening of 26 December 1837.

Giuseppe Verdi began working with La Fenice in 1844, with the premiere performance during the Carnival season of Ernani, which would become Verdi’s most popular opera until it was replaced by Il Trovatore years later. In the next 13 years, the premieres of Attila, Rigoletto, La Traviata and Simon Boccanegra took place at La Fenice.

It did not however always go well for Verdi: the premiere performance of La Traviata, held in 1853, was a failure. Apparently, the audience did not appreciate the choice of soprano Fanny Salvini-Donatelli in the lead role of Violetta: they deemed her too old (she was 38) and too overweight to credibly play a young woman wasting away from love consumption.

Rising from the Ashes

In most recent times, and precisely in January 1996, La Fenice suffered another setback when it was completely destroyed by fire – this time it was arson. Two electricians who had been working at the theater had set the building on fire to avoid paying the high fines their company was to face because they were running behind with the work they had been commissioned.

After many delays, reconstruction began in 2001. With the motto “how it was, where it was” in mind, the design by architect Aldo Rossi followed closely the Medunas’ 19th– century design. In addition, the theater was fitted with extra rehearsal areas and state-of-the-art stage equipment; the seating capacity was increased to 1000. The canal entrance was also reopened, allowing spectators to arrive by gondola.

The new La Fenice was inaugurated on 14 December 2003 with an entire week of shows and performances to celebrate the reopening. Conductor Riccardo Muti directed the first inaugural concert, with the orchestra and chorus of La Fenice performing works by Beethoven, Wagner and Stravinsky. In November 2004, La Traviata was the first staged opera since the reopening, and it was a sensation.

Now, with a history like this, you understand why you need to get your hands on those tickets for La Fenice: it is an opera experience not to miss!

An Unforgettable Opera Evening at the Arena di Verona

The summer opera season at the Arena di Verona is upon us and promises to be as spectacular and thrilling...