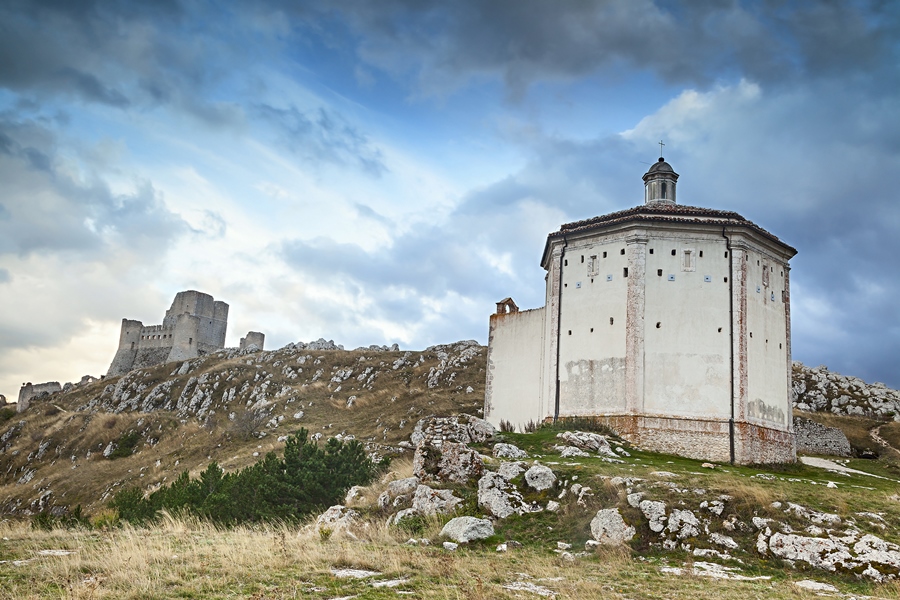 Rocca Calascio, a mountaintop fortress in the Province of L’Aquila in Abruzzo, Italy

Picture a pristine landscape teeming with chamois, roe deer, otters, wolves and Marsican brown bears; where rare peregrine falcons and golden eagles soar overhead and the protected Apollo butterfly flutters its almost transparent wings in the breeze. The Majella National Park in the Abruzzo region is home to about 45 percent of all the wildlife species found in Italy, some of them facing extinction. And over 1,800 plant species grow here as well, making the park a Garden of Eden where biodiversity – not mass tourism – reigns only two hours east of Rome.

The Parco della Majella is a monument to biodiversity

The Majella National Park stretches over some 185,330 acres of spectacular terrain in the provinces of Pescara, Chieti and L’Aquila. Like the back of a giant whale, the Majella massif rises majestically above the Adriatic Sea. More than thirty of its peaks are over 6,500 feet while further down, dramatic canyons and ravines cut their way through the stone. Underground, a vast labyrinth of limestone caves, most of them utilized by man since the Prehistoric Age, spreads out with bizarre rock formations and carvings by cavemen. Pagan temples, medieval frescoes, monasteries and cliff hermitages also make excellent hiking destinations in the park.

Legend has it that the word “Majella” comes from the Goddess Maia, a harsh and upright mother who was, nonetheless, loving and gentle towards her own children. Goddess Maia spent years searching for her son, and finally ended her days in these mountains, giving them her name (the locals call it ‘Mother Mountain’). 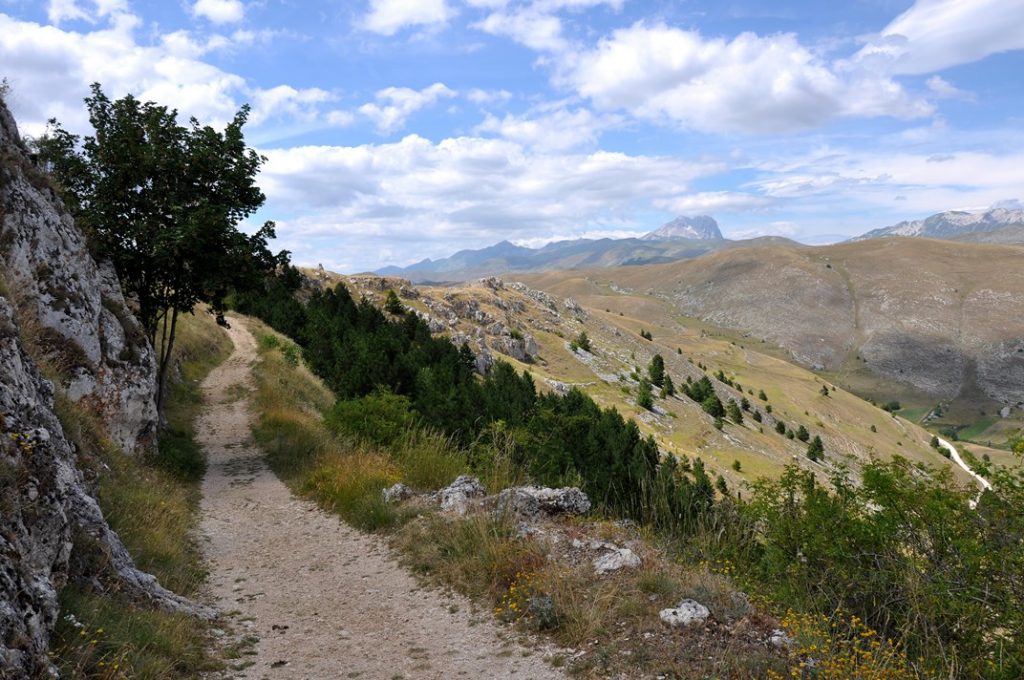 Monti della Laga, a mountain range in the central Apennines.

Millennia of mountain life have produced proud people and secluded individuals who don’t like publicity and don’t want to draw undue attention to themselves — that’s why the initial reaction to the international media blitz after the April 6, 2009 Abruzzo earthquake was embarrassment at being caught in the limelight.

Historically, the rugged peaks of the Apennines have isolated one town from the next and established a balance between population and resources that favored an almost self-sufficient economy, strictly connected to the nature and climate of the region. Emigration played its part in shaping this region too, which is why so many residents of Toronto and New York City and Melbourne and Montevideo can trace their roots to the Abruzzo (and why so many Abruzzo heritage and genealogy websites abound).

But after a century and a half of emigration, things seem poised to turn the other way. The flourishing “green economy” operative in the Parco della Majella could provide a template to help pull Italy out of its economic crisis. The numbers are encouraging: there are over 100 artisan and handcraft firms in the park that employ a total of 240 workers and a whopping 9,000 farms and vineyards that grow or make 20 different agro-alimentary products typical of the region – all this adds up to annual earnings of 13 million euros. 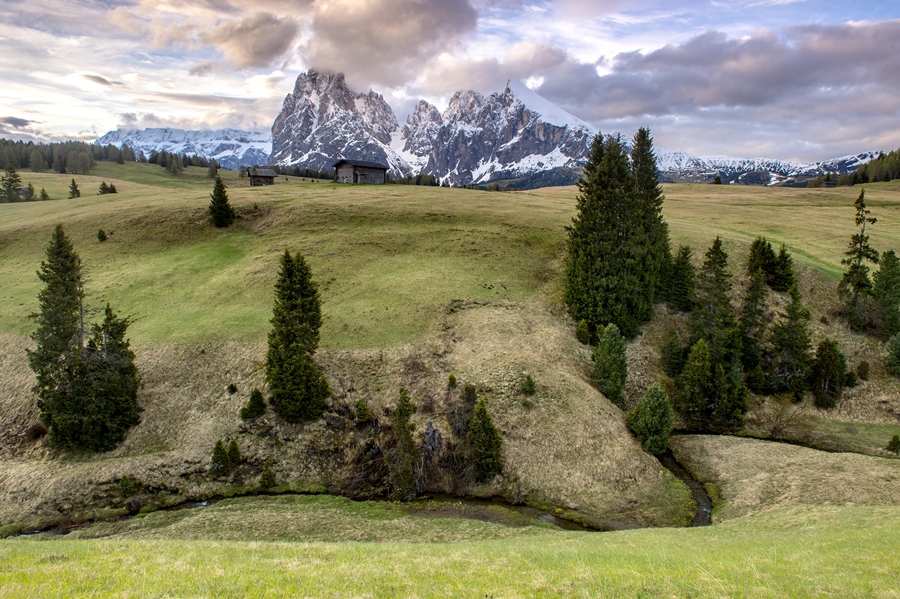 The park hosts 160 restaurants and trattorie, as well as 183 hotels, bed & breakfasts and hostels that provide more than 9,000 beds for weary travelers in a variety of lodging types to suit every budget and taste. And since the national government spends 2,200,000 euros a year for the park’s upkeep (about 30 euros per hectare), the fact that the value of goods and services produced in the confines of the Parco della Majella is something on the order of 15,340 euros per hectare annually makes this an Italian success story of truly impressive dimensions, especially in these troubled economic times.

Characteristically, the modest Abruzzesi aren’t going to blow their own horn or brag about their success, but farsighted outsiders like the half-Swedish, half-Sicilian Daniele Kihlgren have invested in the Abruzzo to create an entirely new breed of sustainable hotel that is perfectly suited to the 21st century. We wrote a few years ago about his groundbreaking Sextantio Albergo Diffuso since the “scattered hotel” trend of installing guestrooms throughout the existing fabric of a fortified medieval village seemed like one to watch. Sextantio is in the neighboring Gran Sasso National Park, right next to Majella and directly below the high Alpine plain known locally as “Little Tibet.” Skiers flock to these awe-inspiring mountains in wintertime and, in early summer, so do climbers who want to experience the thrill of scaling Europe’s southernmost glacier.

So next time you visit Italy, why not swap the Amalfi Coast for the Abruzzo and say goodbye to the crowds? This region is off-the-beaten tourist track, but well worth the (short) journey from Rome or Pescara. Be adventurous, support the green economy, and discover a majestic and unexpected Italian landscape that was shaped by Mother Nature instead of by human artifice.

Known as the “Regina Longarum Viarum,” or “Queen of the Long Roads,” the Appian Way, possibly ancient Rome’s most famous...